NEW NewsBusters Podcast: Hunter Biden Story Only Restarts When Trump Can Be Slammed 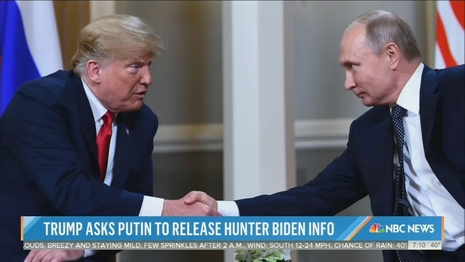 After 260 days of saying nothing, the network morning and evening silence on Hunter Biden was broken by NBC, but only because they wanted to slam Trump for suggesting that war criminal Vladimir Putin should give us the dirt on Hunter.

NBC's Garrett Haake reported "In an interview with a right-wing website out just yesterday, Mr. Trump calls on Vladimir Putin to release this information about Hunter Biden's business deals in Ukraine. Now, this echoes then-President Trump’s call for Volodymyr Zelenskyy to investigate the Bidens. That led to his first impeachment. Only now he’s asking Putin to do it. While Putin is at war in Ukraine." This matches CNN's Jake Tapper shaming Trump for expecting evil Putin to elaborate on Hunter's millions from Moscow.

Then we discuss The New York Times waging war on Project Veritas over Ashley Biden's diary, another story the liberal media aerobically avoided in 2020. This is not the way they covered Donald Trump's adult children....or the Bushes....or the Reagans.