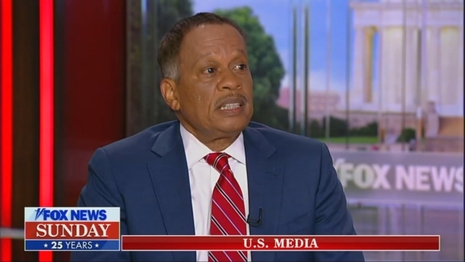 At the end of Fox News Sunday, fill-in host Trace Gallagher set up a "quick back-and-forth" on the New York Times quietly admitting the emails on Hunter Biden's laptop were real. Juan Williams preposterously said "nobody said it wasn't true."

That's obviously false. Fox News has been playing 2020 clips of Biden on 60 Minutes saying it was a "smear campaign" and a "hoax" in a debate with Donald Trump. Biden said it was "foul play." Maybe Juan doesn't watch Fox?

Gallagher began: "The New York Times comes out and says, hey, it's legit after all. You know, Facebook was going to do a fact-check. Never did it. Twitter, never happened. And you think nobody has apologized at all for this. They were wrong across the media, Juan, and nobody has said, you know what, we screwed that up, it wasn't Russian disinformation."

WILLIAMS: No, but I think there's a larger context here, which is that what was this about? What does it prove? Nobody said it wasn't true. That -- what was said was that you can't authenticate it. And then you had certain publications that said, we have authenticated it.

WILLIAMS: Right, couldn't prove it was the key point for organizations.

Couldn't authenticate it? This is a pretty strange standard for liberals and their Big Tech friends who never stopped Brett Kavanaugh's accusers from making unsubstantiated claims of teenage rape in 2018. The main accuser was lionized.

Then Howard Kurtz offered a rebuttal:

KURTZ: Juan, it is an absolute embarrassment that the way that the media downplayed or ignored or mocked or minimized this story, that The New York Times now says is under active federal investigation for possible tax violations or lobbying violations by the president's son. And they're still not covering it. None of the other networks have touched this story.

It doesn't -- you know, it doesn't mean that Hunter Biden's going to be indicted. It may or may not have political fallout for his father. But when you look back at the way Facebook -- Twitter, for example, said, well, you can't even share this information then from the New York Post."

WILLIAMS: But Howie -- Howie, this was in the middle of a heated political campaign intended to damage one candidate in the aftermath of Russian disinformation. I think we were all properly cautious.

KURTZ: It was censorship.

Again, the liberals weren't "properly cautious" on many Trump scandals or on Kavanaugh. But it's especially lame to claim that the Hunter Biden story needed to be censored because it was late in a presidential campaign, based on an unproven claim of Russian disinformation. Should there be some kind of month-long news holiday? In nearly every modern presidential news cycle, liberals have hatched an "October Surprise" of anti-Republican attacks. They were never censored.