Capehart Misquotes Brooks on PBS: Ketanji Is 'Not Some Radical,' She's 'Mainstream'!

Naturally, the PBS NewsHour was delighted with President Biden's nomination of radical Judge Ketanji Brown Jackson to the Supreme Court on Friday night. David Brooks touted how Jackson brings “a new lived set of experiences. It can't help but have a humanizing aspect.” He put her in the mainstream….of the Democrats. That might be correct, but the Democrats are far to the left!

BROOKS: Ideologically, there are all these rating systems that rate judges on how liberal or how conservative they are. She's pretty much in the mainstream of Democratic nominees. One of the rating systems I saw put her slightly to the right of Elena Kagan. Another put her a bit to the left. But she's very much in the mainstream of a Democratic nominee.

And she's obviously replacing a Democratic nominee, so, as Marcia Clark said earlier today, that it's probably not going to alter the ideological balance, but it'll widen the human aperture. 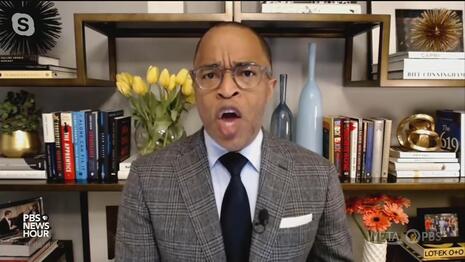 CAPEHART: I think that, if Republicans stick to substantive criticisms of Judge Jackson, either her record or rulings or cases, they will be fine. But the moment they stray into the territory that Senator Kennedy of Louisiana did by saying he hoped the president would choose someone who could tell the difference between a J. Crew catalogue and a law book, or another member of Congress who said before even a person was named that, no matter what, that the president was making an affirmative action hire, if they go down that route, they should be prepared for withering criticism.

That’s a funny standard, to judge the nominee before there is a nominee. After all, Capehart said whoever it was, she would be “brilliant” because she was black and had to overcome all the racism. Then Capehart misquoted Brooks:

In two earlier segments, PBS avoided much talk of the judge's ideology as they oozed about that "widening the human aperture" stuff. But when it came up, PBS correspondent Lisa Desjardins dismissed it. She asked liberal Marcia Coyle of the National Law Journal: "Marcia, now that we know Judge Jackson is the nominee, we also are getting an idea of maybe some Republican criticism ahead, this from Senator McConnell today, the Republican leader of the Senate. He said: 'Jackson is the choice of far-left dark money groups.' Now, that's political, of course, not substantive."

PBS NewsHour reporter Lisa Desjardins objects to criticism of Ketanji Brown Jackson. "This from Senator McConnell today, the Republican leader of the Senate. He said: 'Jackson is the choice of far-left dark money groups.' Now, that's political, of course, not substantive." pic.twitter.com/v3JtLUn6CU

PBS NewsHour is brought to you in part by...you and your taxes. And by Fidelity.