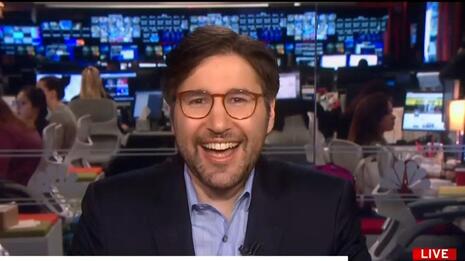 It's one of those New York Times stories that feels like a parody of the paper, but media reporter Michael Grynbaum tried furiously in a Sunday piece to spin President Biden's "stupid SOB" sneer at Peter Doocy into a positive. He's trying to turn sewer water into wine.

In the newspaper, the headline was "The Hot-Mic Vulgarity Where Everyone Wins." It was a "heart-warming civic moment."

Well, if reporter-attacking Biden is endearing, let's just say it: Michael Grynbaum, you sound like a stupid -- well, you know.

Online the headline was:

Joe Biden and Peter Doocy Is the Rivalry Everyone Can Love

A notably unscripted exchange between President Biden and a Fox News correspondent went viral — and turned into what these days counts as a heartwarming civic moment.

It's also an "unlikely feel-good moment." For whom? Let's face it: liberal reporters love it when conservative reporters get attacked.

The spectacle of President Biden lobbing an unintentionally amplified expletive at a reporter from Fox News turned out to be one of the most unlikely feel-good moments of his time in office, our media correspondent writes. https://t.co/keU4cyjE6k

The most annoying part of this spin is how it exploits Doocy's willingness to shrug it off, and not pose righteously as some sort of Wronged Statue of Liberty like Jim Acosta. Grynbaum suggested "some around Washington" think they can use Doocy's shrugs to underline Biden is heart-warming, while Trump was dangerous:

While the exchange echoed past presidents’ venting about the press, some around Washington pointed out that its resolution showed just how different things are under Mr. Biden than his predecessor.

Mr. Trump not only viciously insulted reporters (“disgrace”; “loser” and “enemy of the people”), he also incited public anger against the press. His supporters sent frightening threats to journalists and in at least one case mailed a pipe bomb to CNN. Freedom of the press groups have credited his behavior with eroding the rights and privileges of journalists in autocratic countries around the world.

Liberal journalists were also named during this spin:

Bob Schieffer, the veteran CBS News anchor, surveyed the exchange from the vantage point of having covered 10 presidents.

“It was something we don’t see that often: a civil exchange,” Mr. Schieffer said in an interview. “Both of them came off looking the better for it.”

NO, it's a civil exchange AFTER Biden let his profanity rip. Next up in this cavalcade of ridiculous spin, Grynbaum also used the SOB moment as a fix for Biden hiding from the media! 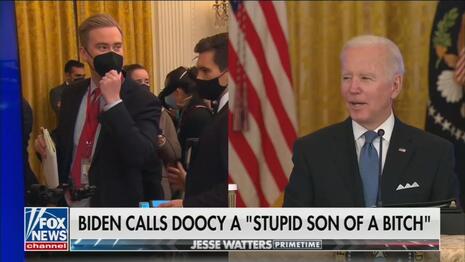 Mr. Biden’s allies have also expressed concern that his relatively few formal interviews with the news media have given critics too much room to define him. An unfiltered moment, inadvertent or not, can remind voters of what they liked about him as a candidate — a politician at his best when he is open with his emotions, even the frustrations of a tough day at the office.

Even Ann Coulter was ushered in to help Biden out:

Plus, even the harshest partisans got a kick out of it.

“Don’t tell my fellow right-wingers, but I thought what Biden said was funny,” Ann Coulter, the arch and arch-conservative pundit, wrote in an email. Although Ms. Coulter could not resist taking a shot at Mr. Biden’s mental fitness, she also conceded, approvingly: “He’s still got sarcasm!”

As Grynbaum has shown before, the Times has a perfectly putrid partisan double standard on sparring with reporters, as he showed with Sen. Martha McSally calling CNN's Manu Raju a "liberal hack."