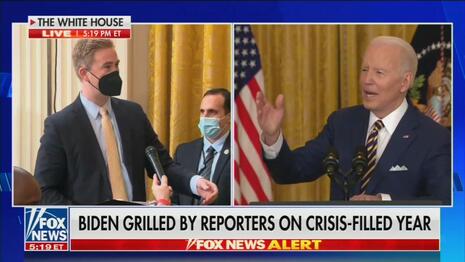 Biden's second formal press conference of his one-year presidency underlined why he avoids them. In the latest edition of the NewsBusters Podcast, managing editor Curtis Houck -- who monitors many Psaki briefings -- shares just how Biden's questioners did.

We start with Peter Doocy getting razzed and called nonsensical by the president. He only asked one question, where other reporters hogged the microphone and asked three or four. But he made his count, asking Biden why he's moving so far to the left. (Biden denies it, but it's obvious.)

It was also fascinating that James Rosen of Newsmax politely asked about a Politico poll on Biden's mental fitness, and Brian Stelter suggested that was "for the far right," when Brian loved to question Trump's mental fitness.

But first, there's the matter of NPR Supreme Court reporter Nina Totenberg offering Fake News to the taxpayers who fund public-radio stations across America. Totenberg claimed Chief Justice John Roberts "in some form" told the justices to wear a mask in deference to Justice Sonia Sotomayor, who suffers with diabetes. Roberts denied it, and Totenberg failed to tell listeners she botched it. Then she denounced the NPR "Public Editor" for writing up her offense.