Newspaper Won't Use the Term 'Dr. Oz' in His Senate Race, But Dr. Jill Biden? That Sneaks In 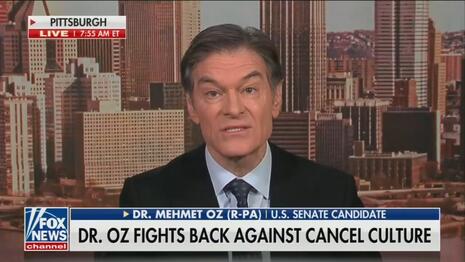 TV celebrity Dr. Mehmet Oz is running for the U.S. Senate in Pennsylvania, in a crowded Republican field. The first controversy he's exploiting to build his campaign is the Philadelphia Inquirer insisting that they will NOT be calling him "Dr. Oz," even though is an actual doctor and professor of surgery.

This is kind of funny, since many papers rush to honor "Dr. Jill Biden," who has a Ph.D., but isn't a physician.

Jeffrey Barg, the "Grammarian" of the Inquirer, wrote an article titled "Two little letters that could skew the Pa. Senate race." Using "Dr. is an advantage in a large field of candidates.

The day after Oz announced his candidacy, The Inquirer’s front-page headline, photo caption, and first sentence all referred to Dr. Oz. That goes against the paper’s style guide, which reads: “Do not use Dr. on first reference for anyone with the title, whether they are a medical doctor or have a doctorate in a nonmedical field, to avoid complaints of unequal treatment from individuals who worked hard to achieve doctorates in nonmedical fields.” It specifies just two exceptions: obituaries, and the Rev. Dr. Martin Luther King Jr....

Going forward, The Inquirer determined that it will refer to all candidates in the same way, which means that while Oz may be referenced as a celebrity doctor, Dr. Oz will be limited to mentions of his TV show … which is now off the air in Philly.

A quick search of Nexis shows the Inquirer has used the "Dr. Biden" salute in news stories. For one -- they quoted Pete Buttigieg using the honorific in a story on Doug Emhoff, who's married to Kamala Harris, on November 11. 2020:

"I think Doug understands how important it is for him and Dr. [Jill] Biden to continue establishing a sense of empathy and respect for those offices," said Buttigieg, author of a memoir, I Have Something to Tell You.

"Doug will have to step up and help Dr. Biden usher in all of these things we've been missing, like respect and empathy, so the American people can sleep at night. It's far beyond being a host."

On the campaign trail, Emhoff bonded with Buttigieg, at the time his competitor for the (still-unfilled) job of first first gentleman. They texted during debates, exchanged advice on "political spousing."

The Inquirer used this terminology themselves in a February story on a food pantry:

On Martin Luther King Jr. Day, LaMarr-Murphy talked a bit about her anti-hunger mission with then-President-elect Joe Biden and Dr. Jill Biden at Philabundance during a day of service. She said that as she and Biden filled boxes for Philabundance clients, he made a promise of his own to fight food insecurity.

And she said she felt she'd met a kindred spirit after Dr. Biden told her that, as a teacher, she too brings food to students - even adults.

Dr. Oz is suggesting he's being "canceled." But they're only canceling the two letters.