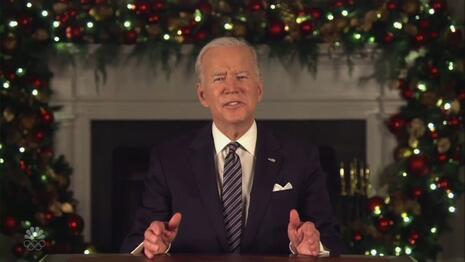 President Biden is suddenly granting softball interviews for the holidays. Late on Friday night, he showed up on NBC's Tonight Show Starring Jimmy Fallon. NBC gave him 16 and a half minutes of unchallenged publicity, just like Fallon used to offer to the Obamas.

Don't take it us from us, take it from Deadline.com: "There were many advantages for the White House in doing the interview, as Biden got to stick to his talking points on the infrastructure bill, the Build Back Better Act and the Covid-19 relief package without facing any kind of serious follow ups." The interview was "effusive."

Fallon began by asking: "Let's start with some good news here you passed your infrastructure bill this is a big deal [cheers and applause] passed! What are some changes that Americans can expect from passing the bill?"

From that, Fallon moved on to the next softball: "I know you've been working hard on the build back better plan. Some people may not fully understand what's actually in this plan. Is there a simple way to break it down?" You could say Fallon sounds like a high school student, but high school students could offer more challenging questions.

Biden pitched the usual malarkey about costs: "By the way, every single bit of that bill is paid for no one making less than $400,000 a year will pay an additional cent in taxes, as well as it will not increase the deficit one penny."

But Biden complained "I don't have a single Republican vote right now to pass it." Fallon said "Wow!" Fallon talked about attending the Kennedy Center Honors in DC,and seeing both Republicans and Democrats enjoying the show. Biden offered potshots about the GOP:

Because the liberal honorees would refuse to attend! pic.twitter.com/CBBXWQbkwl

Even after that, Fallon said "we" gave you a standing ovation at the Kennedy Center, Mr. President, because you're such a "classy guy." He's "bringing class back."

NBC's 'Tonight Show' gave 16.5 minutes to Joe Biden boosting Friday night. Jimmy Fallon: Saw you at the Kennedy Center Honors. "We gave you a standing ovation because I go, 'Here he is. He's bringing class back. He's a classy guy, and you're bringing class back to the office.'" pic.twitter.com/zm8cgIZRl9

Biden's softball interview was brought to you in part by Amazon and Starbucks.