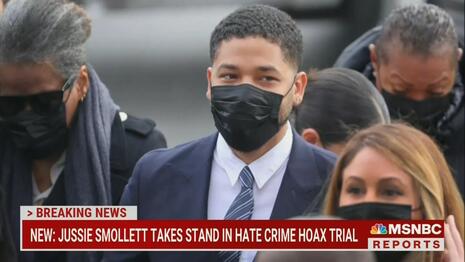 Thursday marked a harmonic convergence as we wave farewell to the careers of Brian Williams and Jussie Smollett, two fabulists who counted on the Left to promote their misinformation.

On the same day that Jussie was found guilty of five counts of hate-crime hoaxing in Chicago, MSNBC was celebrating Brian Williams as a "gift to the country" whose "contributions are too many to number," and the "genuine national emergency" is Brian Williams is leaving MSNBC.

This is like celebrating a chef who gave food poisoning to a crowded restaurant of customers. Janet Cooke and Jayson Blair were never celebrated for their fraudulent tales, but Williams is presented as a precious gem of journalism.

As the jury unsurprisingly underlined how Smollett perpetrated a fraud on the entire country, the "Facts First" crowd at CNN was complaining that conservatives were exploiting this hoax to undercut the credibility of the media establishment. Sorry, CNN, they did that all on their own.

Then MRC Latino director Jorge Bonilla joins the program to analyze what's going on with the Spanish-language media and some surprising developments in politics. Polls now show Hispanics hate the term "Latinx" and are surprisingly divided equally between supporting Democrats and Republicans. This is freaking out the Democrat consultants who specialize in Hispanic voters.