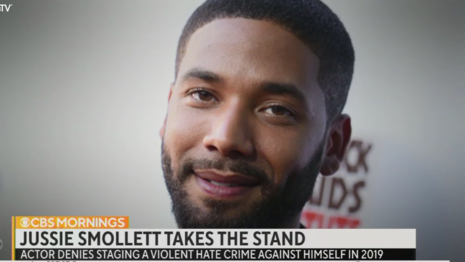 On the latest NewsBusters Podcast, we discuss how the broadcast networks have been reluctant and slow in covering the Jussie Smollett trial. ABC's been almost non-existent after energetically boosting Smollett's hate-crime hoax two years ago. They were much more motivated to cover the Kyle Rittenhouse self-defense trial, and unlike this trial, that had cameras in the courtroom. But this one has a black, gay, Trump-hating celebrity.

CNN found another problem in Don Lemon texting Smollett about how the cops weren't believing his story. After Smollett blabbed about this during time as a witness, CNN ignored it entirely. One might think that after all of Chris Cuomo’s off-camera shenanigans attempting to help his brother the sexual harasser, Lemon might offer a little transparency for viewers about his personal friendship and texts with Smollett.

On a similar front, we discuss how a front-page Washington Post story on how former employees of Kamala Harris suggested as a boss, she was a soul-destroying bully was completely ignored by ABC, CBS, and NBC.