Mollie Hemingway on Fox: No One Trusts the Liberal Media on Elections Anymore 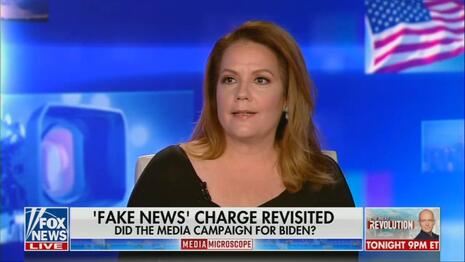 While Brian Stelter complained on Sunday morning about Mollie Hemingway's new book Rigged on CNN and how it was getting play on Fox News -- there's even an online excerpt! -- Hemlngway was interviewed in two segments on Fox's Mediabuzz.

She laid out how the media claimed the 2016 election was horribly rigged from abroad and then the 2020 election was somehow the fairest ever administered.

When it came to 2016, she said "I think it's important to go back to the 2016 election and remember that MSNBC and other prominent media outlets put forth the lie that Donald Trump colluded with Russia to steal the 2016 election. They said this for years. And that's why nobody believes them anymore."

KURTZ: Let me ask you, in your book you adopt the Trumpian term fake news which of course have become part of the culture. So, you write in 2020 -- by 2020...The media were practically campaigning for Joe Biden, level of collusion not seen even during the Obama era. The word collusion goes a bit far for me but the practically supporting part, right on target. And you say it was an outgrowth of four years of Trump coverage.

HEMINGWAY: It was -- I have just never seen anything like this. We saw -- we've known bias exists for a very long period of time. You go back to Eisenhower to have Republican presidents complaining about it. But between 2016 and 2020, something else changed entirely.

It was not just bias but propaganda, it was invention of fake news based on nothing but anonymous sources, things that were refuted on the record by dozens of people such as the lie that Donald Trump had claimed that he didn't go to Aisne-Marne for weather, which was what actually happened, but because he secretly hated dead American soldiers. That was such a lie that got spread into like presidential debates.

Biden even called on The Atlantic first at a press conference after they "reported" that soldier-hating junk so their reporter could claim in a "question" that "President Trump's life is a testament to selfishness, and his soul is that of a coward." That looked like collusion.

Hemingway continued on the Hunter Biden laptop story being suppressed:

At the same time the media were doing something that was the most horrific thing of the entire campaign, suppressing a story that would have hurt their favorite candidate, Joe Biden.

There was legitimate news about the Biden family business that the media went out of their way to lie about, again calling it Russian disinformation, and not cover when it was a very important that the American people know whether or not the person that they were thinking about electing had a family business that was open to corruption by funding from foreign oligarchs or other people with nefarious interest. And the media just suppressed that story and lied about it.

This is, you cannot have free and fair elections when you're in this kind of environment with our media.

A reminder: we found in an MRC poll.that one of every six Biden voters we surveyed (17%) told us they would have abandoned the Democratic candidate had they known about one or more of the news stories we presented about accusations against the Bidens and good news about the Trump record.

Fox's talk with Hemingway was sponsored in part by Abbott Laboratories.