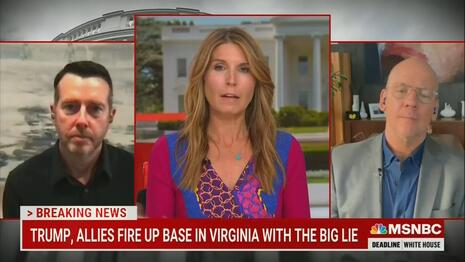 MSNBC host Nicolle Wallace has only one fact check on PolitiFact – a “Pants on Fire” for suggesting Trump is “talking about exterminating Latinos.”

But she certainly mangled the facts on Thursday’s Deadline: White House, claiming Virginia Republican gubernatorial candidate Glenn Youngkin is somehow an “insurrectionist” who “wouldn’t say” whether he would have voted to certify the 2020 election. Fact check: False.

The subject was a Thursday rally in Virginia featuring Donald Trump where Youngkin was not present, where they touted saying the Pledge of Allegiance to a flag they said came from Trump’s speech on January 6 (before the riot). But Youngkin put out a statement distancing himself from violence and the riot. Nicolle couldn’t handle this:

WALLACE: Well, and, John Heilemann, David [Plouffe] just said he's trying to distance himself from the insurrection. He hasn't -- he has said -- I believe Axios reported that Youngkin wouldn't say whether they would have voted to certify the election on January 6 if you’re a member of Congress. That is part of the slow-motion insurrection. He is an insurrectionist. So he can distance himself all he wants from the disgusting important display of a flag flown over a scene that became the, you know, final resting spot of the police officers and others. But he himself was for the insurrection.

She cited the website Axios. But this seems to be the footnote, from September 26:

Youngkin believes Biden beat Trump in the 2020 election legitimately. But while speaking with Axios, he wouldn’t say whether he would have voted to certify the election on Jan. 6 if he were a member of Congress. He did say there's “no room for violence in America.”

Sadly for Wallace, then came Axios again on September 27, with the headline: “Youngkin clarifies he would have certified 2020 election.”

The Youngkin campaign didn't immediately respond to a request from Axios about whether he wanted to clarify his answer, but when asked Monday whether he would have voted to certify, he told WTKR-TV, “Yeah, absolutely.”

John Heilemann then jumped in and mangled it again:

And then the flag showed up, and the flag showed up and the video was there and people pledging allegiance to a flag, the flag of the insurrectionists, a flag just like the flags that police officers were dealing with. That was the thing that was too far.

But PolitiFact doesn't easily throw "False" flags at MSNBC pundits. They can safely mangle what Youngkin said on the record.