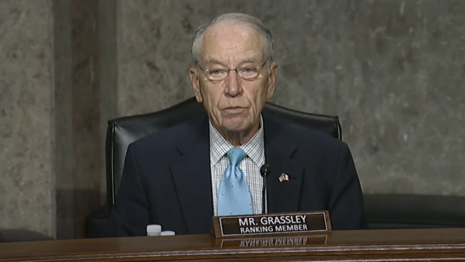 For some mysterious reason, PolitiFact felt the need to offer a rebuttal, but not on the facts:

During a hearing on a voting rights bill named for the late U.S. Rep. John Lewis, Sen. Chuck Grassley said that a majority of voters support voter ID laws. We found that the polls overlook nuances in the debate.https://t.co/CdbYRlDgvl

The August "explainer" article they linked to offered this attempt at nuance: "A wide variety of voter ID requirements and verification processes already exist, and critics of tightening voter ID laws usually don’t have a problem with these as long as there are a wide number of options and backup processes exist."

This doesn't sound accurate, considering that "critics of tightening voter ID laws" have an aggressive tendency to use terms like "Jim Crow on steroids" to describe them.

This article also included the inconvenient truth that polls showed Americans favored voter ID in public polling. Right there in their summary was this: "Meanwhile, polls show broad public support for voter ID laws, including among Democrats."

• A Monmouth University poll from June 2021 found that 80% of respondents supported "requiring voters to show a photo ID in order to vote."

• A Pew Research Center poll from April 2021 found that 76% of respondents favored "requiring all voters to show government-issued photo identification to vote."

• An AP-NORC poll from March 2021 found that 72% favored "requiring all voters to provide photo identification in order to vote."

That's why we at NewsBusters tweeted over PolitiFact's strange tweet: "When the Facts are not on your side, argue the Facts "overlook nuances."

PS: Here's an exchange that begins with Grassley's discussion of where the polls line up in favor of voter ID requirements: