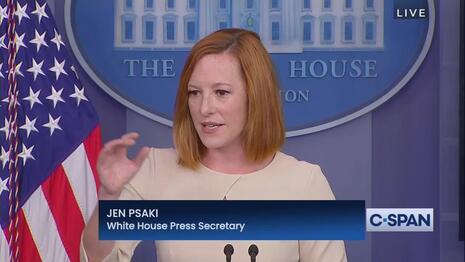 Doocy asked this: "You said the president's gonna have a virtual meeting with House Progressives to talk about how this 'Build Back Better' package is now gonna be smaller than $3.5 trillion. You had been saying that it cost zero, so are you now admitting that the plan does not cost zero or is it less than zero?"

"Let's not dumb this down for the American public here," Psaki replied.

PSAKI: What we're talking about is how much the top-line investments are, which are all paid for, so therefore costs zero. No matter what the costs or size of the top-line investments are, we have ways to pay for it. So the point is that's important to the American public -- all of your viewers too -- is that this is not going to cost the American public a dollar.We are going to pay for this by asking corporations, the highest incomes -- so people under $400,000, I should say --we will ask corporations and the wealthy to cover the cost of these necessary investments.

It's too easy to mock this argument that if it's paid for, it costs zero. If I go get a haircut and pay for it, it costs....zero? It didn't cost me a dollar?

"Just to not dumb it down then," Doocy continued, "does the plan cost nothing, or is the plan free?"

"The plan costs nothing for the American people who make less than $400,000 [a year]," Psaki said. "If you think that companies that paid zero in taxes last year, 50 of the top companies should continue to pay zero in taxes, we're happy to have that debate." Progressives thought Psaki "schooled" Doocy.

Minutes later on Fox News Channel, former Bush strategist Karl Rove pulled out his whiteboard to mock Psaki and her defense of the Biden plan. He said the actual cost is $5.5 trillion once you take out "budget gimmicks." He said "That money has to come from somewhere. And where it comes from is the American economy. I love it also. She went on to say that those that make less than $400,000 a year will not pay for it. Baloney! They have a tax in there on people who smoke cigarettes. Last time, that wasn't just limited to people that make more than $400,000 a year." And they're going to tax small businesses.

Fox's 3pm hour was sponsored in part by Liberty Mutual and Golden Corral.