Dr. Wen's Book Tour Is Spiking Her Planned Parenthood Presidency All Over 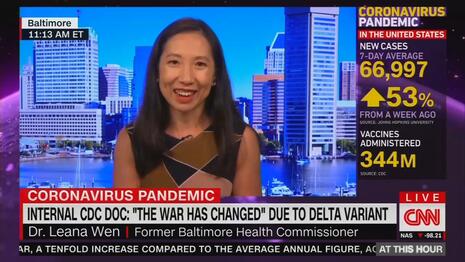 CNN medical analyst Dr. Leana Wen had a short and stormy tenure at top of Planned Parenthood, but CNN avoids mentioning it like the plague. They are not alone. Wen is now selling a new memoir called Lifelines: A Doctor's Journey in the Fight for Public Health, and the book information on Amazon doesn't include it.

On Tuesday, NPR's talk show Fresh Air interviewed Dr. Wen for 36 minutes (more than 6,300 words in the transcript, according to the Nexis data-retrieval system). Nowhere in there was the slightest whisper of her presidency of Planned Parenthood. NPR host Terry Gross read her bio four times, but it never came up.

It's not like the book doesn't address it, as Emily Zanotti at the Daily Wire summarized:

“On her first full day on the job as Planned Parenthood’s president, Dr. Leana Wen appeared on ABC’s The View to talk about her vision for the organization,” Business Insider detailed based on Wen’s book. “When the segment wrapped, Wen, who’d left her role as Baltimore’s health commissioner for the gig, was elated that it had resonated with the live, cheering audience. But her new colleagues at Planned Parenthood’s headquarters were not: Wen had failed to say the word ‘abortion.’”

“You need to talk about abortion at every media interview,” Wen says she was told by a Planned Parenthood staffer. “You’re the president of Planned Parenthood. People expect that from you. Not saying ‘abortion’ sounds as if you’re ashamed of it.”

“If we don’t talk about abortion openly, loudly, and proudly, as a positive moral good, then we are further stigmatizing it and the people who need it,” Wen claimed she was told.

The irony was even thought Planned Parenthood claims abortions are only three percent of their procedures, it dominates their messaging!

‘Wen said, ultimately, the tension between her and those around her wasn’t just about abortion but about politics,” Business Insider noted. “Planned Parenthood sees itself as a liberal advocacy organization, outspoken on issues loosely related to healthcare, like net neutrality, defunding the police, and DC’s statehood, she wrote.”

“I was given a choice: change, or leave,” she said.

It WAS ironic for Terry Gross to skip the abortion part. Somehow no mental cymbal crashed as Wen insisted on a vaccine mandate, with no right to choose: "I don't think that people should have the choice to infect others with a potentially fatal and extremely contagious virus. And I think we as a society need to figure out, what are our values? Do the value of freedom of choice for some really override the public's health for the most vulnerable?"

Gross did have the time to ask Dr. Wen about the public health impact of Freddie Gray dying in Baltimore police custody while she was the city's health commissioner, because race is everything.

TERRY GROSS: You are an immigrant from China. You moved here when you were around eight. And Trump, when he was president, called it the China virus. And taking their cue from that, a lot of people in America became very anti-Asian. There have been a lot of attacks against Asians, just a lot of insulting behavior directed at Asian Americans. And I'm wondering if you've been the recipient of any of that.

LEANA WEN: Unfortunately, yes. And I would hate to tell you the frequency at which I receive these anti-Asian comments. I would say that every time I am on air, I will receive actually quite a few messages that specifically tie me to the Chinese Communist Party -- which is ludicrous because my family left on political asylum from China -- or that will blame me and, quote, "my people" for the coronavirus. And, of course, there are many, many messages telling me to go back to my own country, which - at this point, of course, I'm an American citizen. I am here in my own country.

Gross didn't ask about the Wuhan lab-leak theory, because that would cause those ugly Americans to blame China for the spread of the coronavirus.