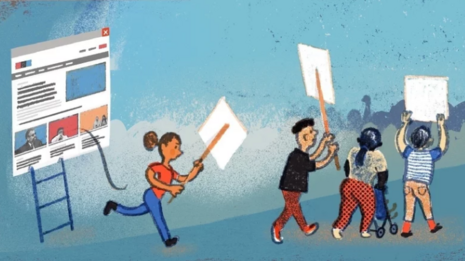 National Public Radio is bowing to pressure from leftist journalists inside their workforce, and loosening restrictions on their "objective" reporters marching in protests for the "freedom and dignity of human beings." You don't have to choose between activism and journalism. Blur it up!

We can all guess this verbiage doesn't mean they all wanted to participate in the March for Life or an NRA event. As often happens, NPR is leading the rest of the press further to the left...with our tax dollars.

NPR rolled out a substantial update to its ethics policy earlier this month, expressly stating that journalists may participate in activities that advocate for "the freedom and dignity of human beings" on both social media and in real life.

The new policy eliminates the blanket prohibition from participating in "marches, rallies and public events," as well as vague language that directed NPR journalists to avoid personally advocating for "controversial" or "polarizing" issues....

The new NPR policy reads, "NPR editorial staff may express support for democratic, civic values that are core to NPR's work, such as, but not limited to: the freedom and dignity of human beings, the rights of a free and independent press, the right to thrive in society without facing discrimination on the basis of race, ethnicity, gender, sexual identity, disability, or religion."

Is it OK to march in a demonstration and say, 'Black lives matter'? What about a Pride parade? In theory, the answer today is, "Yes."

NPR ethics policy update: Journalists can now participate in activities that advocate for “freedom and dignity of human beings” on social media and in real life. https://t.co/oLe7PSffJj pic.twitter.com/vcLmRhyHgW

McBride endorsed the change, calling it a "solid step in the right direction." The right side of history meets the right side of ethics! She concluded: "these guidelines affirm that during this chaotic time in which we are living, being a journalist and standing up for human dignity are not mutually exclusive."

This seems like a pretty significant moment in the fight over whether journalists have to pretend that democracy and fascism are equally good.https://t.co/ozmqgtf2i7

We recognize that the line between standing up for human rights and being "political" is a fine one that looks different from different perspectives. A march for racial equality may be non-political in principle, for instance, but that may not hold true if the march is for a specific piece of legislation or where organizers or speakers include politicians aligned only with one party. The fact that others may attempt to politicize social issues or the way people live their lives does not mean that journalists are engaging in political activity.

As usual, Generation Z wants to obliterate conflict-of-interest restrictions on their wokeness:

As social justice causes took to the platforms, journalists were often caught in a new gray area between longtime professional practices and mores around personal communication. In the wake of George Floyd's murder, a younger generation of journalists pushed NPR to modify its traditional prohibitions.

"Our goal was to make NPR a place that employees felt they could be themselves at work, and they wouldn't have to be one version of themselves outside of work and another version at work," said Alex Goldmark, senior supervising producer for Planet Money and co-chair of the 22-member committee that handled the revision.

While the country was experiencing widespread calls for institutions of all kinds to reckon with systemic racism, newsrooms were facing internal pressure. Black, Hispanic, Asian and Native American journalists have argued that they have been disproportionately confined by — even disciplined over — policies that limit personal expression.