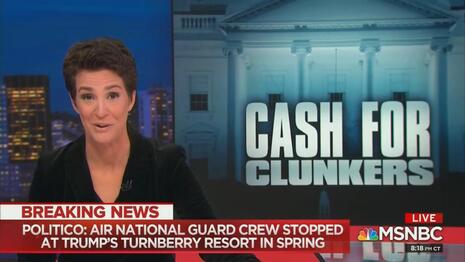 "The problem that many people have with the news they get, in terms of trusting it, is that a highly partisan opinion show is somehow included as a newscast," media reporter Joe Concha told Flood.  "This is an opinion host who pushed Russian collusion with Trump, Trump allies, for the better part of three years was proven wrong by the Mueller Report and never offered one apology or contrition. Now we’re rewarding that behavior and that’s a whole a bowl of wrong."

MRC's Dan Gainor quipped "Including ‘The Rachel Maddow Show’ among news shows is like counting Beyond Meat as something you actually want in your burger."

PBS led the way with 52 nominations, while CNN racked up 41 and far-left Vice News picked up 16 nominations. Fox News had zero. Conservatives need not apply for awards.

Concha wasn't the only critic in the piece:

Journalist Drew Holden, who has made a name for himself in the media industry with viral Twitter threads showcasing bias, said the "particulars of the nominations are almost laughable" and found issues with many of the nominations in addition to Maddow.

"These awards are a good reminder about how much of corporate news coverage is not designed to educate everyday Americans but to win the praise of other elite, progressive institutions," Holden told Fox News.

"CNN earning an award for coverage of the coronavirus outbreak, despite getting it wrong on masks, the lab leak hypothesis, transmission of the virus and more? Nightline winning an award for the kidnapping plot of Governor Whitmer, which we’ve since come to find out involved more FBI agents and informants than actual perpetrators? You’ve got story after story listed for awards that not only got material facts wrong but for which other outlets did a far better job of getting the truth," Holden said.

For "Outstanding Edited Interview," there was the 60 Minutes interview where Lesley Stahl sneered at President Trump about how there was no Hunter Biden scandal. Maddow was also nominated in that category for a softball interview with Lev Parnas, a Ukrainian associate of Rudy Giuliani. She failed to ask Parnas about his own pending federal criminal case for making false statements and falsifying records.

Doesn't falsifying records slow down a liberal journalist? Not if the falsifier is on the "right side of history." Gainor also quipped to Fox "If the News Emmys want credibility they should have special awards for the many phony stories the media foisted on us -- from Russian collusion to Jussie Smollett."