Politico reporter Maya King offered a piece on Wednesday on how Critical Race Theory is affecting politics. The headline was:

Debate around critical race theory pushed wealthy Loudoun County to the frontlines of the GOP’s culture wars. Republicans are hoping to turn that discord into political capital.

This carries the usual Democrat spin: it somehow leaves out that the Democrats and their race-based interest groups like the NAACP somehow aren’t waging “culture wars,” and somehow the Democrats aren’t driving a narrative on race to beat the Republicans. King accurately reports what spurred the recent battlefield: Democrats took over the Loudoun County school board, and the NAACP and other lobbyists pushed them into an "equity" crusade.

As liberals often do, King is trying to suggest nobody knows what this means: "critical race theory, something that few people can clearly define, is dividing parents here." Add the usual note that Republicans are lacking evidence of "anti-racism" education, and never mind that promoters of the "1619 Project" boast of spreading their message into 4,500 schools. 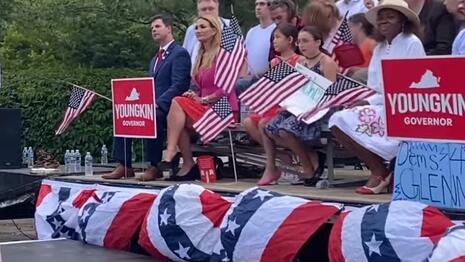 Republicans hope to leverage this issue to wrest away Democrats’ control of all three branches of state government. Last week, GOP candidate Glenn Youngkin even held a campaign rally in front of the Loudoun County school board building to decry critical race theory—even as the school board repeatedly denies teaching it. (Nor is it taught in school districts around the county where conservatives are attempting to ban it.)

This links to another Politico story on how "Trumpworld bets big on critical race theory," and "Republicans aren’t coy about what they are trying to do. It’s not just about changing curricula. It’s about taking back Congress." That story doesn't prove conservatives have no evidence. Instead, it notes that black journalists and entertainers are pushing "systemic racism" education.

King also linked to "equity reports" the Loudoun County school board paid for from an "Equity Collaborative," and their recommendations included teaching the progressive line on race. Read the code words: "Design additional opportunities for LCPS educators to engage in professional learning about color consciousness and implicit bias. Further establish a culturally-responsive framework to inform curricular and instructional efforts across the division."

King retweeted a quote that pulled out her quote from a Loudoun County school board member named Atoosa Reaser worrying about the potential violence of conservative goons, er, critics:

“How much more room is there for escalation? People died on January 6.” @mayaaking with the goods on the outrage over critical race theory in America's richest county. https://t.co/nwlBEG2q9d