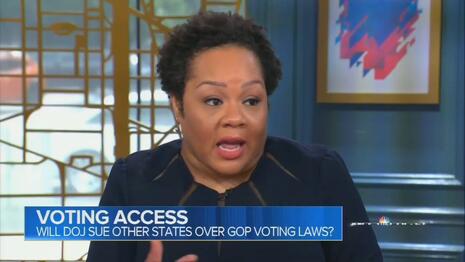 There's something about ballot-integrity laws that send liberal journalists off a cliff of panic. On Sunday's Meet the Press, PBS White House reporter Yamiche Alcindor claimed Republicans were causing an "existential crisis" on voting in America, when turnout in 2020 was historically large. She claimed Republicans want to squash all votes that aren't Republican votes. Where did she get that kooky conspiracy theory?

In the second half, we discuss Brian Stelter ripping into Sean Hannity as leading "the authoritarian drift of the GOP" on Sunday's Reliable Sources. Stelter's ratings have been abysmal, but he keeps going back to the old argument that it's authoritarian to criticize CNN, because CNN is Democracy, Facts, and Truth Personified.

Enjoy the podcast below, or wherever you enjoy your podcasts. Spread the word! NewsBusters would appreciate your support. It might even make Brian Stelter mad.