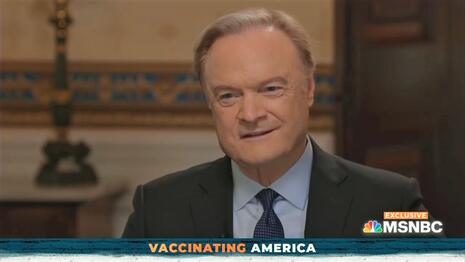 These liberal networks looked down their nose at friendly Fox News town halls with Trump. But O’Donnell was a helpful Democrat all the way through the Biden interview. It began with congratulations:

And it ended with more sugar about the president's son who died in 2015:

You're 113 days into the presidency. This is the top of the mountain. You were climbing this career mountain for many, many years. You're the most prepared president in history with 36 years in the Senate, eight years as vice president.

The one thing you don`t have on this 113th day in the presidency is your son Beau's, advice, and I'm just wondering what you would say if Beau called you today and said, hey, Pop, how's it going?

He could ask Hunter Biden for advice...?

O'Donnell hammered on polls showing Republicans more reluctant to get the vaccine, with a predictable anti-Trump spin: "But there is a partisan resistance, and that is among people, many of whom fail what is a basic mental competency test -- who is the president of the United States? They actually get that question wrong. How are you going to convince them to get the vaccine?"

COVID wasn't the only topic. O'Donnell wanted to get to Liz Cheney, of course, and that awful Kevin McCarthy:

O'DONNELL: You were trying to make a deal today in a room with Kevin McCarthy, where what he was doing before he came up here was expelling Liz Cheney from his leadership group for saying things like, the election is over, as she said last night on the House floor. And Kevin McCarthy is the same person who supported Liz Cheney just weeks ago.

How can you accept whatever someone like Kevin McCarthy says today as something that you`re actually going to legislate a few weeks from now or months from now?

Biden insisted he would take a man's word, until he broke it, and O'Donnell repeated:

PS: The show's opening looked like a DNC commercial.

MSNBC opened its "Vaccinating America" special with one of those dramatic and musical introductions that sounded like an ad for that courageous leader Joe Biden. pic.twitter.com/iAkZKEHVl2