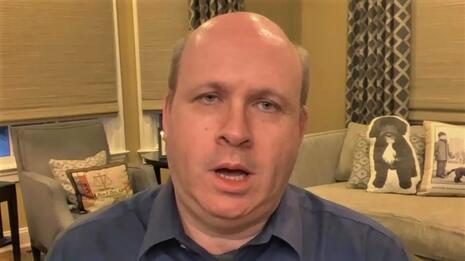 On Tuesday night’s All Things Considered, they took a very one-sided approach on the Senate debate over the “For the People Act” that would federalize elections. Anchor Ailsa Chang brought on a hardcore partisan Democrat lawyer, Marc Elias. He’s best known to conservatives as the lead attorney for the Hillary Clinton campaign in 2016, the bagman who paid Fusion GPS for the phony-baloney Steele Dossier full of collusion delusion.

Chang mentioned none of that. She barely mentioned in her introduction that he was a Democrat. The online article made no mention of Democrats:

'It Feels More Desperate Than 2020': Attorney On New Voting Restrictions

NPR's Ailsa Chang speaks with Marc Elias, a voting rights attorney with Perkins Cole [sic], about the bills proposed by Republican state legislators to restrict how and when to vote in their states.

Chang’s only skeptical line with Elias was challenging his optimism that Republicans would let this Democrat bill pass. Elias was allowed to place himself on the side of having all votes counted and favoring “consent of the governed.” Near the end, there was this:

CHANG: You’ve been an election lawyer for a very long time now. This is not the first time we’ve talked to you about efforts to restrict access to voting. But I’m wondering: does this moment right now feel different to you? In all your years litigating these issues?

ELIAS: It does, it feels more desperate, in many respects, than even it did in 2020. Because you know, Donald Trump is gone. And one might have hoped that the pathology that led to some of the anti-voting and voter suppression efforts would have gone with him. But instead, the Big Lie has now become orthodoxy in far too many corners of the Republican Party. You know we’re gonna see the Republican House [delegation] likely kick Congresswoman Cheney out of leadership for no offense other than saying that Joe Biden won the election. So the stakes feel very, very big as the Big Lie now becomes the policy of state after state in these new laws.

That's the official Democrat line on Cheney, and forget the reporters who've heard how Cheney's political operation "has been described as difficult, brittle, unresponsive and tone deaf," and that she's actually endangering the re-election of anti-Trump Republicans.

But what's really crying for rebuttal is Elias getting to prance around about a "Big Lie" when he worked for Hillary Clinton, who refused to accept her defeat as they all smeared Trump as colluding with the Russians with their slimy "dossier" before and after he was narrowly elected.

PS: Chang's interview with Elias the Democrat was much softer than her combative interview a month ago with Georgia's Republican secretary of state, Brad Raffensperger. When the Republicans get a chance to speak, they're...Jim Crow. Chang asked "There are many critics of this law who are comparing it to voting laws from the Jim Crow era, which were on their face not targeted at any specific group of people, but ultimately did disenfranchise Black voters, even some white voters who didn't support the party in power. What is your response to that - that this law conjures up the Jim Crow era for many people out there?"

Raffensperger shot back "It's extremely unfortunate and distasteful that people would do that."