Don Lemon: Trump's a 'Clinical Symptom of Everything That Is Wrong with America'

The latest edition of Time published “7 Questions” for Don Lemon as he sells his book on racism. This included a CNN-esque thrashing of Trump as a “clinical symptom of everything that is wrong with America.”

Time’s Janell Ross asked: "In the book, you compared Trump to a symptom alerting internal disease. What is the diagnosis Trump reveals?" 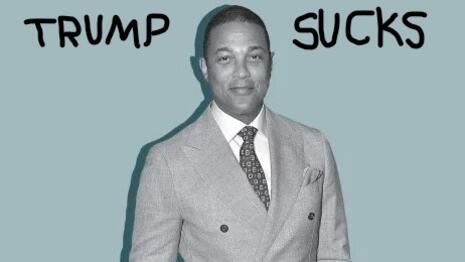 Lemon also said the Capitol riot demonstrated the end of white supremacy: "I think when you see a group of insurrectionists enter the United States Capitol, try to overturn an election that they have been told was stolen from them by Black people in big urban areas in this country. I think that is the ultimate sign of fear."

In a passage that's online but not in the magazine, Lemon also unfurled another version of "whites should stop denying they're racist" argument.

Ross underlined that Lemon wrote in his book that "this is a time to have a point of view, not just an opinion as a journalist." Lemon explained:

I have always said that everyone has a lens through which they view the world. So I am a Black man who came from the South, who is gay. And to pretend those qualities don’t exist, I think, is doing a disservice not only to yourself, but the people you’re trying to serve as a journalist. And so I think it’s important to tell people what’s the lens you’re viewing the world from, and then have them understand it.

It's also only online that Ross suggests Lemon may have "evolved" from the (conservative?) position taken in 2013 that blacks shouldn't have children out of wedlock. This was apparently "reminiscent of the media and courtroom attacks on Trayvon Martin’s personhood."

Lemon tried to suggest he was misquoted, then replied in part: "I’ve always been an advocate for my people. I am the only Black man in primetime on cable. And the things I say are going to get more attention perhaps than anyone else simply because of who I am, and my platform. But that goes with the territory, and I welcome it."