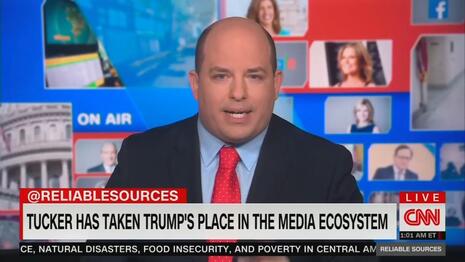 We have a small announcement. The NewsBusters Podcast is expanding to three days a week.

On the Monday show, Brian Stelter and the CNN Reliable Sources gang have now decided that the way to crumble Fox News is to compare Tucker Carlson to Donald Trump. He argued "Tucker tells the same conspiratorial us-versus-them story that Trump told. The same they're-out-to-get-you story that Trump told for years. It is the paranoid style in American politics all over again." Except Stelter is out to cancel Fox. He's proclaimed the conspiracy on national TV.

Not only that, in Sunday's show Baltimore Sun TV writer David Zurawik suggested Fox News should be removed from the White House press corps. "Let's take them on the word, let's not let them on the plane. You want to let Proud Boys on Air Force One, no, I don't think so. These guys are doing the same thing." Accusing Peter Doocy of being just like the Proud Boys is like insisting Yamiche Alcindor of PBS is just like Antifa.

Speaking of CNN, there's also Don Lemon going on a book tour and telling the white people they should stop denying they are racist.