The Lincoln Project may be collapsing from within, but CNN and MSNBC have kept promoting their spokesmen without asking them troublesome questions about their John Weaver sex-harassment scandal. The Daily Caller counted 17 MSNBC interviews in January without a single Weaver-scandal question. On Morning Joe on February 1, co-host Mika Brezinski threw George Conway one lame last question, and he claimed he barely knew the guy (though they apparently authored articles together.)

Since then, it's a perfect record of avoidance in nine more interviews:

-- February 4: Kurt Bardella on MSNBC's The Beat with Ari Melber

-- February 8: George Conway on MSNBC's All In 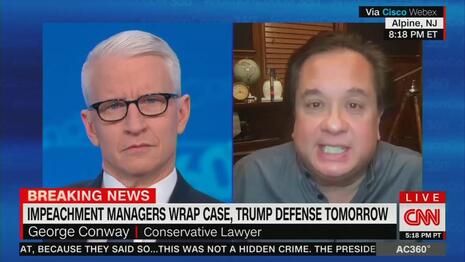 These guests were uniformly invited to thrash Trump and his Republican enablers. Worse yet, they were described as conservatives (for electing Biden?) On Monday, MSNBC's Chris Hayes said "I want to bring in conservative attorney George Conway, a staunch Trump critic, co-founder of the Lincoln Project.' On Tuesday, CNN's Anderson Cooper echoed: "Joining us now, conservative attorney and Lincoln Project co-founder, George Conway."

On Friday, MSNBC wasn't backing down on their favorite ex-Republicans:

Given all the investigations and potential violations of federal law, I asked MSNBC if they planned on booking anyone associated with Lincoln Project on their shows.

“We’ll continue to book guests who are associated with the Lincoln Project as news warrants.”

PS: In the midnight hour on CNN International early Thursday, they were giving free play to a nasty Lincoln Project ad:

JOHN VAUSE, ANCHOR: And with that in mind, the anti-Trump Lincoln Project has a new ad targeting Republicans who backed the former president, repeated his lies about rigged election. Marco Rubio, I guess, once was also fired up that mob which attacked the Capitol, he's part of the ad.

VIDEO CLIP, UNIDENTIFIED FEMALE NARRATOR: Now the people who fed that mob are trying to escape responsibility. Donald Trump is responsible. Rudy Giuliani is responsible. Josh Hawley is responsible, Kevin McCarthy, Ted Cruz, Rick Scott, Ron Johnson, FOX News, Newsmax, OANN. They didn't strike the hundreds of blows that killed Brian Sicknick and hurt his colleagues. But they told the lie that led their followers to act, and the blood is on their hands.

VAUSE: It's a pretty powerful ad. Will it have any effect? Will there be a political price at the end of all of this?

CNN senior political analyst Ron Brownstein gave the usual CNN answer: "All of these dynamics suggest the Republican Party is morphing out of the western political small-"D" democratic tradition into something else: a party that believes any means necessary is justified to maintain power at a time when the country is demographically evolving away from it."