HuffPost Celebrates Dan Rather, Master of the 'Pithy Putdown' of Trump 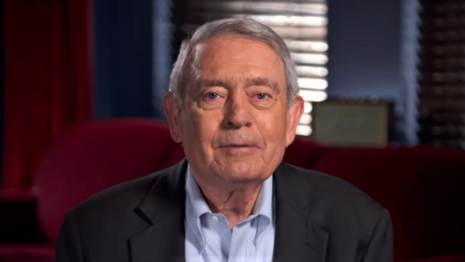 Disgraced ex-CBS anchor Dan Rather has been celebrated by the Left in recent years as a wizened old master of social media. The latest example is Lee Moran of HuffPost in a tribute titled "Dan Rather Has A Pithy Putdown For Donald Trump’s Postelection Antics: The veteran newsman has zinged the president time and again on Twitter this month."

It included several "zingers" that could have been used just as easily to explain Rather's failure to exit stage left after he disgraced himself and CBS with phony National Guard memos in September 2004. He hung on as anchorman for six months, and then hung around CBS like a bad odor as a 60 Minutes correspondent for another 15 months.

These Rather tweets are all "check the mirror" moments for Rather, who still insists his phony story was true:

-- "Can’t we get to the point in this movie where Toto pulls the green curtain?"

-- "Enough is enough. And it's been enough, for long enough. Enough said."

-- "Wine gets better with age. Whining gets old real quick."

We would nominate this tweet as the one that seems to apply best to Rather after his long years of shameless denial, including an awful Rather-excusing movie badly named Truth:

How will history view this? Unhnged? Bonkers? Or just sad? Maybe, the rants of a poor loser? All of the above?

Rather also "zinged" about tinfoil hats:

-- "Is anyone else getting tired of the headlines: Election Results Are Still The Same As They Were Weeks Ago When Everyone Who Doesn’t Wear Tinfoil on Their Head Knew Biden Won?"

-- "I checked with medical experts and apparently you CAN physically wear a mask AND a tinfoil hat at the same time. Just clearing that up in case anybody was wondering."

HuffPost saved the "best" for last, Rather tweeting "Dude. You lost."

Rather has the self-awareness of a rotting piece of fruit.