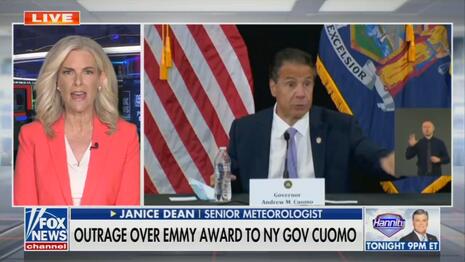 Fox News meteorologist Janice Dean bluntly spoke out on America's Newsroom Monday morning on the International Emmys granting an award to New York Gov. Andrew Cuomo for being a Democrat -- er, for his wonderful COVID briefings. Both of Dean's in-laws died in New York nursing homes from COVID-19 after Cuomo pushed COVID patients into nursing homes to recover.

Fox host Sandra Smith asked Dean for reaction, noting this would be the first Thanksgiving without her in-laws.

JANICE DEAN: I didn't think that the governor could make me more surprised after his leadership book, of course, was released over a month ago and he’s been on a self-congratulations tour to all of the television and radio stations talking about his leadership and how he flattened the curve here in New York City as cases rise. My in-laws were on the curve he flattened. It’s jaw-dropping, it’s insulting, it’s sickening to see him accept an award for his leadership that we don’t have answers to when it comes to the coronavirus patients going into nursing homes for 46 days because of his executive order.

Fox host Sandra Smith read the Emmy citation from International Emmys president Bruce Paisner: "The 111 daily briefings worked well because he effectively created television shows with characters, plot lines and stories of success and failure. People around the world tuned in to find out what was going on and New York Tough became a symbol of the determination to fight back."

The Washington Examiner reported that in October, Dean joined a throng of protesters who filled a casket placed outside of a Brooklyn nursing home with about 6,500 copies of Cuomo’s new book on the coronavirus.

Dean said she's never received any personal communication from the governor, but staff did reach out: “I did get a response from his office … on Friday and his office asked when my husband’s parents died, the exact dates and what nursing homes they were in. That’s the only response I’ve ever gotten and to me that’s a question of ‘Prove it to us that your husband’s parents died.’ How insulting!"