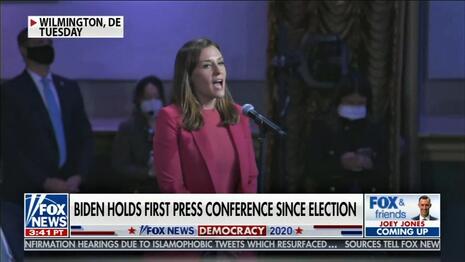 Politico’s chief Washington correspondent Ryan Lizza defined himself in President Trump’s briefing room as a furious competitor for Rudest Journalist. He asked press secretary Kayleigh McEnany "Does President Trump believe that it was a good thing that the South lost the Civil War?” And when the official count of coronavirus deaths reached 100,000,  he asked her “What does the White House view as the number of dead Americans where you can say that you successfully defeated this pandemic?”

So it was fascinating when Lizza started getting abuse on Twitter for observing “discouraging signs about the Biden team and press access so far.” At Politico, he wrote “Beat reporters covering Biden tell me that the basement strategy of the 2020 campaign has continued into the transition....The press is being kept in the dark about what exactly the president-elect is doing most of the day beyond vague descriptions of ‘internal meetings.’”

Should we feign a shocked face? This underlines what every conservative and liberal and squishy centrist should have known: Biden and his handlers would like to curtail access to the press to exactly the degree that his voters (including all his voters in the press corps) will allow.

This becomes downright comical when a measure of access is granted, like his November 10 briefing. As Lizza noted, “a press aide controlled who got to ask questions, which were limited to five outlets.” There were no Acosta-like disturbances from Fox News.

Instead, marvel at that mauler Mike Memoli of NBC: “I wonder if you have a message for the President, who may well be watching right now, and how do you expect to be able to work with Republicans when so many have thus far refused to even acknowledge your victory?”

And that gladiator Jeff Zeleny Of CNN: “Have you spoken to your long time friend in the Senate, Mr. McConnell? And what do you make of his specific comments over the last 24 hours?”

And that karate-kicker Mary Bruce of ABC: “How will you move ahead if the President continues to refuse to concede?”

Could Biden handle the fists of fury from Josh Jamerson of The Wall Street Journal? “During the lame duck, will you be coordinating with Speaker Pelosi on how she should be negotiating with Republicans?”

And finally came the finishing blows from a local assassin, Meredith Newman of the Wilmington News Journal: “What do you say to the Americans that are anxious over the fact that President Trump has yet to concede and what that might mean for the country?”

Oh, and if that punishing blow wasn’t enough, there was more: “How do you expect to work with Republicans if they won’t even acknowledge you as President-Elect?”

They played clips of these marshmallows on Fox & Friends, and media reporter Joe Concha joked about the Fox shut-out. “Biden avoids Peter Doocy the way that Harrison Ford avoided Tommy Lee Jones in The Fugitive." Concha slammed the press for obsessing over Trump. If this man is the new president, why not treat him that way?

What makes this charade even funnier is remembering how the “objective” press was outraged whenever Donald Trump doled out questions to journalists supportive of Trump. Now none of them have uttered the slightest whisper about the exclusion of anyone who would dare ask Biden a question about....Biden.