'Hope and Healing'! These Women's Magazines Are Head Over High Heels for Kamala Harris 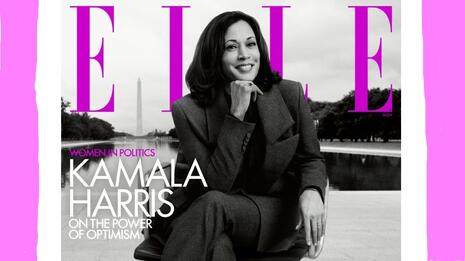 As the vice-presidential debate approaches, the Democrats can count on the "women's magazines" to be completely in the tank for Kamala Harris. Twitter touted on Tuesday that ELLE has a new cover story by Ashley C. Ford. The online headline is "Kamala Harris Is Fueled By Optimism: The woman who could be vice president on the fight for justice and freedom she’s been waging since birth."

Senator Kamala Harris started her life’s work young. She laughs from her gut, the way you would with family, as she remembers being wheeled through an Oakland, California, civil rights march in a stroller with no straps with her parents and her uncle.

At some point, she fell from the stroller (few safety regulations existed for children’s equipment back then), and the adults, caught up in the rapture of protest, just kept on marching. By the time they noticed little Kamala was gone and doubled back, she was understandably upset. “My mother tells the story about how I’m fussing,” Harris says, “and she’s like, ‘Baby, what do you want? What do you need?’ And I just looked at her and I said, ‘Fweedom.’”

Given Harris's staunch pro-abortion record, this is an interesting line: "Dignity is a word she brings up often. She says she has been defending a person’s right to dignity from day one of her time in Washington." (Italics hers.)

Ford ended the article as it began: "If there’s anything we can know about Senator Kamala Harris, it’s that. When it comes to freedom, she will fight."

A similar article appeared in the October edition of Vogue, although Lizzo is on the cover. The cover does carry the words "MVP: Why Kamala Harris is history in the making." On page 76, the headline is "THE NEW AGE: Joe Biden's running mate, Kamala Harris, is a symbol of hope and healing for millions of Americans. Tracy K. Smith meditates on why Harris feels like history in the making." Smith, a poet, kvelled over Kamala: 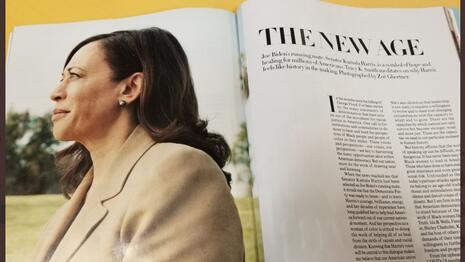 When the news reached me that Senator Kamala Harris had been selected as Joe Biden's running mate, it struck me that the Democratic Party was ready to listen -- and to learn. Harris's courage, brilliance, energy, and her decades of experience have long qualified her to help lead America forward out of our current national moment. And her perspective as a woman of color is critical to doing the work of helping all of us heal from the strife of racism and racial division.

You can't criticize Kamala. "Unfounded as they are, today's partisan attacks against Harris belong to an age-old tradition of threat and intimidation designed to silence voices of truth and dissent."

Smith concluded that with Harris on board, "I feel energized. I feel emboldened to brazenly hope. I feel the thrill of community coalescing around a powerful voice calling for change. I feel the light of a new age."