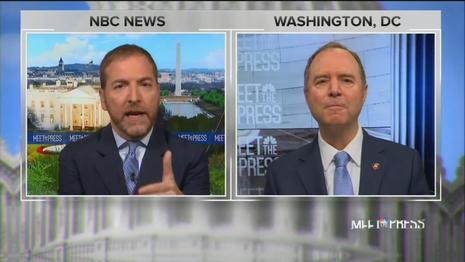 One would think it’s a wacky idea to launch a second impeachment crusade a few months before an election, but NBC Meet the Press host Chuck Todd was prodding Adam Schiff from the left on Sunday to restart his engines, based on the new John Bolton “tell-all” book.

Bolton chose not to testify in the first impeachment attempt….it looks like he wanted to hold out for the book profits. Todd asked Schiff if he didn’t do enough:

I know that you wanted to see Mr. Bolton testify. You wanted to see him do it voluntarily. You also, I remember you and I had a conversation before the impeachment trial began, about the issue of Bolton and about why the House chose not to force the situation because you thought that it was better done in the Senate. Do you regret that decision now? Should you have fought harder to get Bolton to testify before you voted on the articles?

Schiff said “Bolton said he would sue us if we subpoenaed him.” So Todd suggested aggression is never too late:

TODD: Look, if you don't act now and you sort of wait to act and you wait to see what happens in November, is that too late? If you believe he has done impeachable acts with the Chinese government, can you really wait until after the election to, to put Bolton under oath, to start the process?

ADAM SCHIFF: I don't think we should wait if we conclude that there are important things that he says that need to be exposed to the public. The public needs to know exactly what they have in this president. A lot of it is not a surprise. But at the same time, exposure of this president's misconduct is the best way to protect the country.

Can you believe Chuck used to tout neutrality? Made ads as a referee? Now he's insisting the media needs to insure the Black Lives Matter fervor doesn't fade. At the end of today's show, he noted Team Trump wants the media to press Joe Biden for answers -- "come on media, get him out there" -- and he dismissed that with "you're losing." The media's on Team Basement Campaign. Biden hasn't had a press conference since April 2.

Todd isn't a referee. He's the broadcaster telling you who's losing -- the side he wants impeached again, because that will help insure the losing.