Criticizing the so-called "independent fact-checkers" isn't just about whether their fact checking is accurate. It's about which "facts" they choose to evaluate, and which politicians they choose to evaluate and how often. For example, in 2017 and 2018, PolitiFact performed 297 "fact checks" on President Trump, and just nine on Senate Democrat leader Charles Schumer. There are only 20 Schumer checks since PolitiFact was founded in 2007.

PolitiFact just has a noticeable tendency to find Democrats to be truthful. See the last four fact checks on PolitiFact New York: 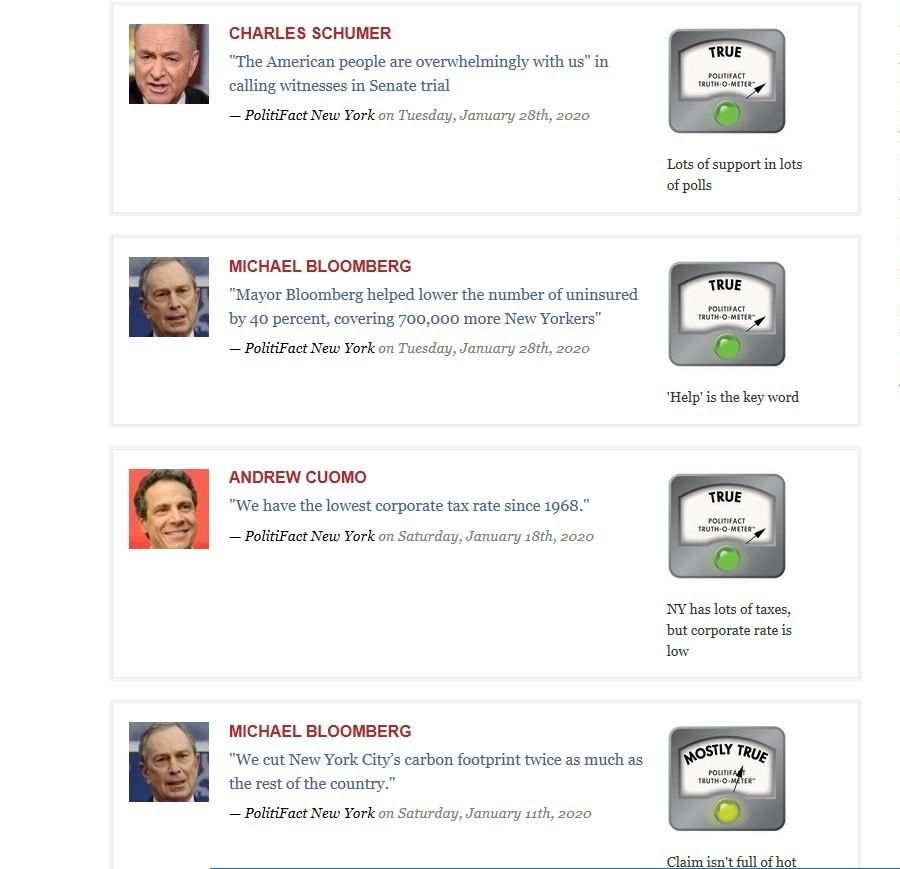 On Tuesday, PolitiFact evaluated Schumer as "TRUE" on this subject:

It's obviously true that Americans have told pollsters they support "witnesses" in a "trial." That's a lay-up question, and very much in line with Schumer/Pelosi messaging.

Schumer was asked at a January 24 press conference if he could get Republicans to vote for witnesses, when the "moderate" Republicans like Sen. Lisa Murkowski hadn't taken a position. He said:  "I think the message has gotten across very strongly. The American people are overwhelmingly with us. The House managers are making the case. And we will continue to make it."

Now ask them if they support removing President Trump from office. That's not "overwhelming" at all. It's become a virtual tie if you average the polls.

Based on their record since their founding, PolitiFact isn't really hunting for Schumer to say anything False. Now try this statement from Schumer's press conference on Tuesday. Doesn't this offer fodder for fact-checkers?

As Kyle Drennen noted yesterday, Schumer said a similar thing to Chuck Todd: "This has been the most massive obstruction, absolute obstruction that we have ever had.”

At best, this statement is overwrought. The trial rules passed by the Senate allow for a vote on whether to summon witnesses and documents after both sides make opening arguments and submit their arguments to questioning from senators. That's not an "absolute obstruction" plan. It's a "delay the vote" plan.

For demonstrating an amazingly selective standard on which Schumer statements to "fact check," we rule PolitiFact is Half Baked. For more, see our Fact-Checking the Fact-Checkers page.