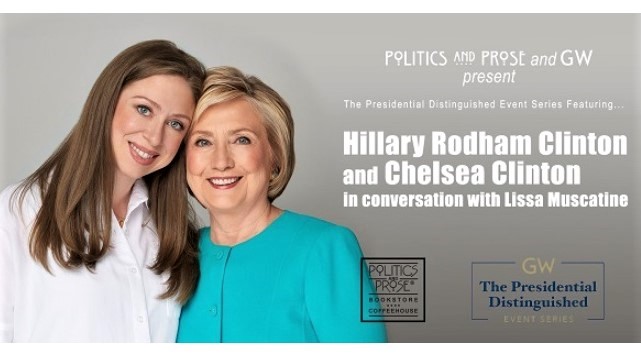 Washington Post "gender and society" columnist Monica Hesse is most assuredly speaking for the vast majority of the Post staff when she gushes all over the front of Monday's Style section that "Hillary Clinton is the one that got away. But isn’t going away." Hillary has a new book, and Hesse isn't having any protests that Hillary opposed all transparency in her communications during her tenure as Secretary of State.

She went to Venice for a famous art festival, and while she was at that art festival she performed in an installation, and for that installation she sat behind a re-creation of the Oval Office’s Resolute Desk, and while sitting at the desk, wearing a fancy caftan and symbolically acknowledging the dumbest whataboutism to emerge from the 2016 election, Hillary Clinton read her emails. [Italics hers.]

She has tweeted. She has clapped back. Rudy Giuliani claimed that Joe Biden hadn’t been properly vetted because he was protected by the Clintons. “Yes,” Clinton dryly replied. “I am famously underscrutinized.”

And she’s right, of course, my God, it’s hard to think of another human whom we so love to hate and so hate to love, and can’t get rid of, and then fiercely miss as soon as we do.

Who is we? It's the Post staff and their liberal subscribers. Hesse went to see Hillary and Chelsea at a ticketed event at George Washington University. I'm sorry, "we" went to the event:

So there we were — again — buying an expensive ticket — again — to listen to Hillary Clinton — again — and think about what she meant to us. Or means. Or will mean, a decade from now when we’re still stuck in whatever codependent relationship this is.

“I am crying,” a young woman informed her seat mate as Clinton walked onstage to a standing ovation and sat in a cushioned chair at George Washington University’s Lisner Auditorium. The young woman repeated, as if her wet face were not self-evident: “I am crying.” [Italics hers.]

For nuance, Hesse acknowledged that this "dutiful periwinkle brick" of a book from the two Clintons "feels like a laborious collection of Wikipedia entries on women and girls you've actually heard of." Hesse doesn't acknowledge that it might just be ghost-written. But the book becomes a stand-in for her conflicted love-hate for Hillary:

Because holding it in my hands, this book, which is well-researched, and historically significant, and which represents everything I hold dear, a book that seems thoughtful and prepared, a book that probably had a plan for campaign finance reform and climate change, and couldn’t help that its horndog husband abused his power with an intern more than 20 years ago (but should really stop complicitly brushing off the offense now) — holding this book in my hands, I cannot tell how much I actually love it, and how much I just desperately, desperately wish I did.

What more can we possibly want from this woman?

This therapeutic exercise seems designed to be shared by everyone who pays for the Post, online, or On Dead Tree. "The audience gobbled it all up. The audience, more women than men, more young than old (it was a college campus), snorted it up, as one snorts the heady drug of the alternate reality you all thought would come to pass."

Hesse concluded by considering what the liberal fan base wants from Hillary:

It would be lovely if we could look at her as a human instead of a reminder of messy marriages and messy times and the limits of our own forgiveness and the repercussions of letting the perfect be the enemy of the sane.

This is Ipecac on newsprint if you're not a Trump-loathing Democrat.