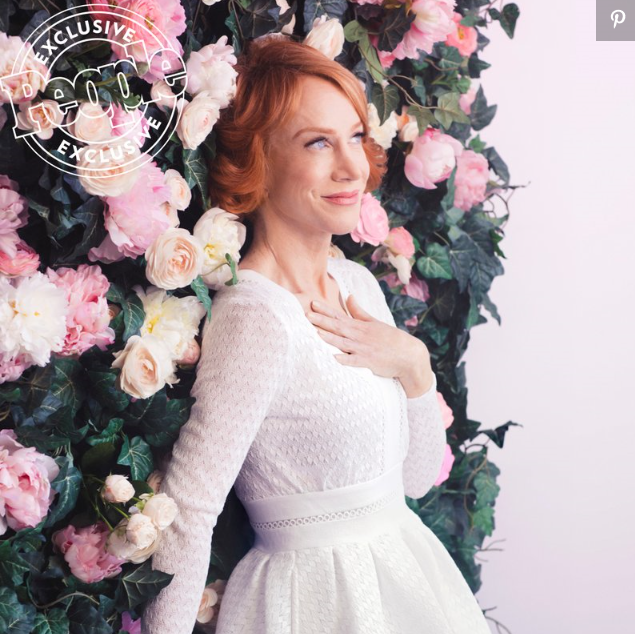 People magazine gave Kathy Griffin the most sympathetic profile you might possibly imagine intheir August 12 issue as the comedian continues to dig out of the hole she created when she took a picture with a likeness of the bloody, severed head of President Trump.

Next to a picture of Griffin surrounded by roses came the headline "Kathy Griffin Is Still Standing." Nowhere in the four gushy pages with positive pictures was this scabrous image. People's Kate Coyne described it as a "Halloween mask of the President with ketchup poured on to resemble blood."

Griffin claimed she thought "This will maybe show up on some blog" -- instead of being a viral nightmare that cost her a concert tour and her CNN New Year's Eve gig with Anderson Cooper.

Sympathy was poured on. Every word out of Griffin's mouth was treated like the gospel truth. Her mother watched Fox News and supposedly said "They're saying you went and joined al-Qaeda!"

Griffin soon found she could barely even leave the house, as death threats started to arrive -- addressed not just to her, but also to her mother and her sister Joyce, who was in hospice care for end-stage cancer.

“My mom had an old-timey answering machine — not even voice mail — and people would leave the most vitriolic hate,” Griffin says of the recordings she’d race to stop her mother from hearing.

...And she has one other regret, when she thinks about Joyce receiving letters "telling her to go to hell" on the very day that she died: "I felt guilty, like I brought this on," she said.

"I am American all the way. And I am so grateful for the freedoms I have here"

People touted how she quickly booked shows in 15 countries, "from Iceland to Australia. The resulting 'Laugh Your Head Off' tour (get it?) sold out abroad and earned her upward of $2 million." Then in 2018, she was back touring in America, including Carnegie Hall and Radio City Music Hall in New York. A documentary of her performances, titled A Hell of a Story, "got a standing ovation at the South by Southwest film festival and is now playing in limited release."

And yet, you're still supposed to feel sorry for her. "I have three friends on a good day," she quipped. Anderson Cooper is not one of them. "I don't think he has any interest in it," she said.