New York Times television critic James Poniewozik is a big fan of the anti-Trump content of the CBS All Access drama The Good Fight, especially the weird animated Schoolhouse Rock-style cartoons inserted into the show.On Monday morning, he tweeted. "CBS post the 'Melania' Good Fight video on YouTube cowards," and "Here's an unofficial version; this is currently the best minute of television in any given week." He linked to a YouTube video of a nasty Melania cartoon that appeared in the April 18 episode. 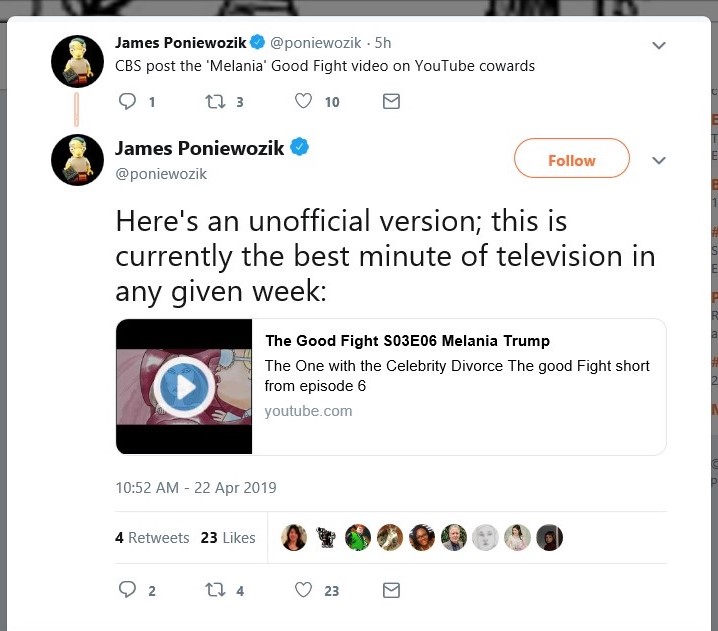 A Melania Trump impersonator was the key character in the latest episode, and she claimed to have a "pee tape" to use against her own husband. Lead character Diane Lockhart and her secret "Book Club" hacker group figure out this Melania is an imposter.

MRC's Scott Whitlock made a quick video that shows how the cartoon just shows up in the show...and when the cartoon is over, it's off to an ad break.

These are the snarky lyrics, made snarkier by the pictures:

Melania came with her name and a dream

Maybe, I mean, what do I know?

First Ellis Island and then quarantine

Poles, and Italians, and Irish

Some kind of stew meat that tasted like home

Lonely but stylish / She'd sigh and say I wish that I

Lived in some castle somewhere in the sky

With someone who'd always take care of me, why

Is it so hard to get there from here?

Maybe she struggled, and toiled, and tried

One day she woke with a man by her side

Finally she rose to her station

Now that she be's the best that she can be

Does she recall her beginning?

Does she feel tired of winning?

Does she feel tired? [As Trump seemingly asks for hanky-panky]

“When you see it in the context of a big-budget live-action lawyer drama, it’s so weird,” Good Fight animator Steve Angel admits. After including an animated short about the impeachment process at the end of the show’s second season, these goofy musical interludes have become a regular part of the CBS All Access legal drama’s third season. “I just think it’s funny!” Angel says. “Funny and weird.” [Italics theirs.]

MRC's Brent Baker notes these shorts are not always animated. Sometimes they're #Resistance songs that play to raucous cheers. A couple of weeks ago, the anti-Trump lyrics included "“He finds his facts on Fox And Friends, he’s rotten to the core. It’s like this nightmare never ends, we can’t take any more! Stop hurting us...” The assembled crowd hopes to get the song on All In with Chris Hayes, like that's TV nirvana.