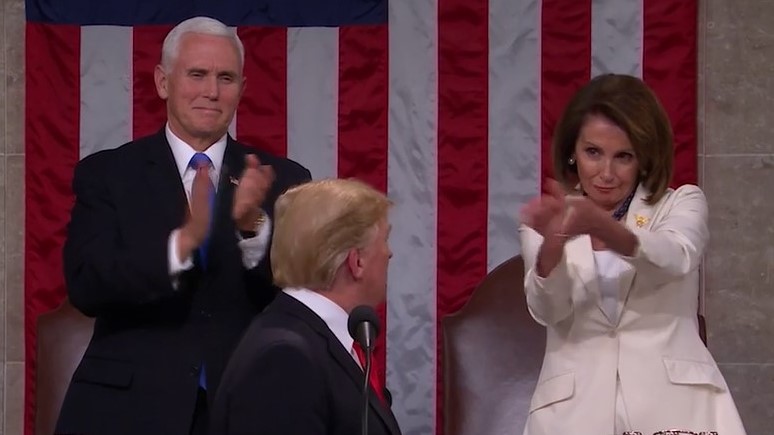 Washington Post "gender and society" columnist Monica Hesse wasn't a bit shy about being a Democrat cheerleader after the president's big speech. Her column was headlined "The exquisite shade of Nancy Pelosi’s applause at the State of the Union." The Post also used the term "exquisite rudeness" in social media.

Now try to imagine this newspaper ever using the term "exquisite rudeness" to a Democratic president. Six years ago, the same paper offered this SOTU review from TV critic Hank Stuever:

(I think my favorite RT of the evening was from @TheTweetOfGod: "I was trying to come up with a neat way of saying John Boehner looks like a constipated apricot but I couldn't.")

Hesse described Pelosi's contempt like it was a kind of gourmet delicacy:

The lasting visual image from Tuesday night’s State of the Union address was captured by photographer Doug Mills. It featured House Speaker Nancy Pelosi (D-Calif.) applauding President Trump in a way that can only be described as . . . withering? Pitying? Lucille Bluth-like in its contemptuousness? [That's a character on the TV show Arrested Development.]

At his lectern, the president mentioned bipartisanship and turned to acknowledge Speaker Pelosi; she rewarded him by cocking her head, arching an eyebrow, and inventing, as comedian Patton Oswalt would put it online, a clap that somehow managed to be a profanity.

Its power was in its restraint. Pelosi was not booing the president. She was acknowledging his words. She was providing him, in the technical sense, with exactly what he was hoping for: approval. But this was a derogatory clap, make no mistake. This was mockery wearing a half-baked costume of politeness.

Her lips mostly remained either pursed or puckered, as if the entire speech was a bit of gristle that must be endured before it could be discreetly spit into a napkin. She shuffled papers in front of her — printouts of Trump’s speech, one presumes — as if marking time for when it would all be over. Her applause was sparing, weary, and had the distinct vibe of a parent applauding a kindergartner for tying his shoes when the only goal is to quickly scoot him out the door.

Hesse wasn't alone. The paper's "Morning Mix" column by Allyson Chiu was headlined "‘Queen of Condescending Applause’: Nancy Pelosi clapped at Trump, and the Internet lost it." These were mostly liberal tributes, with a couple of disapprovals tossed in. Like the Twitter account Respectable Lawyer: "Respect to Pelosi. Circumstance demanded she clap, so she invented this weird walrus clap that was mocking, aggressive, and delightfully surreal all at the same time. Nobody has ever has clapped like this."

Chiu concluded with a tweet from Becca Morgan that exclaimed: "This is it. This is the photo of the century. @SpeakerPelosi wins."

This proves once again that the Post is written by Democrats, for Democrats.