Before the analysis ends on the first Trump prime-time Oval Office address, we must recommend Mollie Hemingway's Federalist smackdown of pseudo-"fact checks" attempting to discredit Trump's speech text. She found most of the "fact checks” were instead "critiques of opinions." Many journalists critiqued things not included in Trump’s speech, and sometimes “fact checkers” admonished the president for saying completely true things.

For example, Hemingway cited Washington Post checker Salvador Rizzo "right but misleading" verdict on the number of illegal aliens arrested. They don't like "illegal entry" being counted as a crime. "So the numbers add up, but they’re misleading. The total covers all types of offenses, including illegal entry or reentry. ICE does not break down arrests by type of crime, but 16 percent of the total charges and convictions (not arrests) in 2016 were strictly immigration offenses." 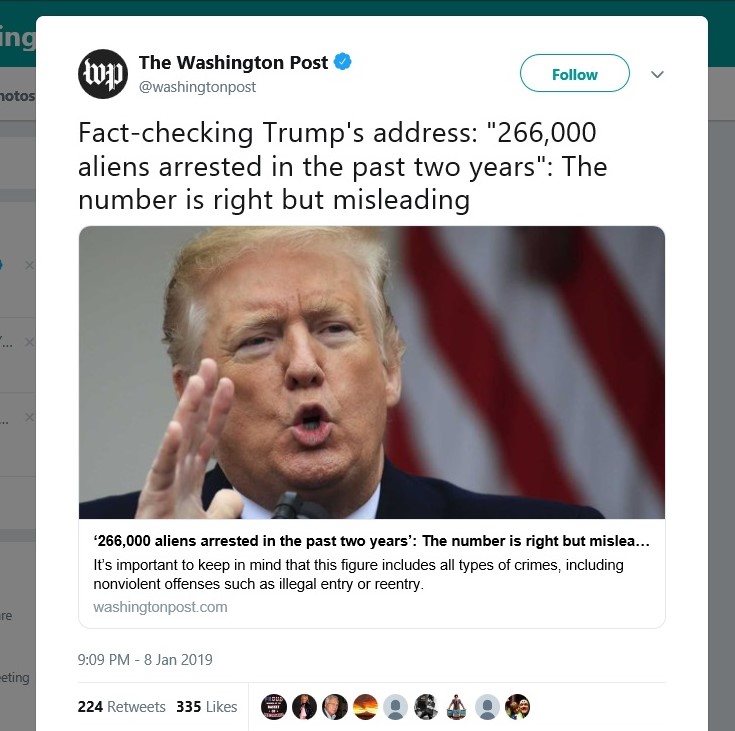 Linda Qiu at The New York Times made a similar right-but-misleading point.

Hemingway found no respect for Politico:

Politico’s Ted Hesson did such a bad “fact” “check” that it’s almost impressive. Among the things he checked as “not true” was Trump’s contention that there’s a crisis on the border. I’m not joking.

Then she turned to New York Times reporter Peter Baker:

A New York Times article originally headlined “Trump Cites Misleading Statistics of Crisis And Crime Along Border” failed to explain what the misleading statistics were. Perhaps that explains why they changed the headline to “Trump Escalates Border Wall Fight in National Address.”

In a rather shrill opinion piece billed as straight news, Peter Baker claimed, without evidence, that describing the situation as a crisis “raised credibility questions.” Then he went on to slay strawmen and other items the president didn’t even mention....

Baker also wrote the same non-sequitur about heroin entering through legal ports of entry. I don’t mean to be insulting, but did they even listen to the president’s speech before declaring it false?....

How does it “raise credibility questions” to say these true things? And how are these true things countered by saying, as Baker does, “The majority of heroin enters the United States through legal ports of entry, not through open areas of the border”? Neither Trump nor Pelosi said that they did!

Finally, Hemingway mentioned a "live" fact-fail from CBS, which they later deleted:

CLAIM: The president claimed one in three women have been sexually assaulted traveling to the border.

FACT: Between 60 percent and 80 percent of female migrants traveling through Mexico are raped along the way, Amnesty International estimates.