Democrats are going to need to hold seats in pro-Trump red states to achieve a majority. Democrat papers like The Washington Post are there to help. Post reporter Sean Sullivan reported on Sen. Heidi Heitkamp (D-North Dakota), repeating her insistence that Donald Trump asked her to switch parties...because she was already so conservative:

Trump won North Dakota by about 36 points in 2016. To secure a second term this year, Heitkamp will likely have to win over many conservative voters who cast ballots for Trump. She said she has agreements — deregulation and caring about “working people,” for example —  and disagreements — tariffs, for example — with the president.

“He’s always ribbing me a little bit about being too conservative to be a Democrat,” she said of Trump, a former Democrat who switched parties.... 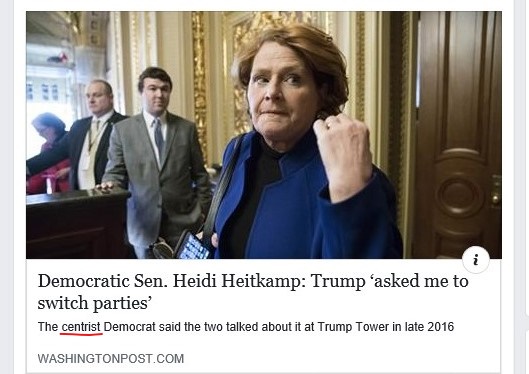 On Facebook, the Post story subhead summarizes that Heitkamp is a "centrist Democrat." Is that true? A look at the American Conservative Union voting scores says No. Her 2017 conservative voting score was ZERO. Her lifetime score over five years in the Senate is 11 percent. Her Planned Parenthood Action Fund voting record is 100 percent.

Are you stupid? Senator Heidi Heitkamp hopes so. Liberals are not a good fit in the Republican Party. This is all shameless politics hoping North Dakotans are stupid. Earth to Heidi: When you vote against tax cuts, when you vote for abortion after 20 weeks when the baby feels pain, vote to give billions to Iran, or to jam the oil and gas industry with more Obama regulation, when you are pro-sanctuary city and refuse to lift a finger to fix Obamacare… You are officially a big-time liberal and no spin about your conversations with the president is going to change that.