Leah Barkoukis at Townhall assembled a cast of liberal ill-wishers on Twitter, just hoping Hurricane Irma trashes Mar-a-Lago. The Daily Beast posted a milder version of the "poetic justice" schadenfreude at the top of their home page on Friday: "Monster Hurricane Irma Barrels Toward Climate Change Deniers’ Playground." Another headline suggested this monster hurricane was a "SUPERCHARGED LESSON" for conservatives. Michael Daly began: 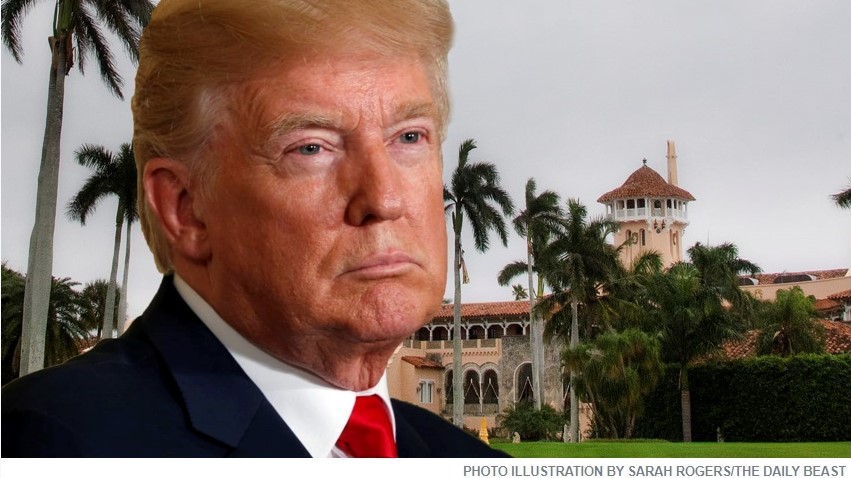 The playground of big-shot climate-change deniers becomes subject to a hurricane evacuation order as of 5 p.m. Friday.

And were it not for all the innocent souls who have been and likely will be hurt by Hurricane Irma, you might see poetic justice in homes owned by President Trump and billionaire David Koch and commentators Rush Limbaugh and Ann Coulter being battered by a storm made the most powerful ever recorded in the Atlantic with a boost from warmer water and moister air.

Daly began by noting Ann Coulter's mockery of how hurricanes are exploited by the Al Gores of the world to drive strict regulation of those antiquated fossil fuels.

Coulter responded to that earlier calamity with her usual discerning insight, giving a whole other meaning to being all wet.

“I don’t believe Hurricane Harvey is God’s punishment for Houston electing a lesbian mayor,” she tweeted. “But that is more credible than ‘climate change.’”

Now a second supercharged storm, Hurricane Irma, was roaring toward the storied stretch of sand where Coulter’s neighbors include her fellow blabbermouth Limbaugh.

Daly then caricatured Rush Limbaugh's Monday remarks about how local media drives people into a panic in hurricane season, and then made a drug joke: "And Limbaugh said all that after he has apparently stopped popping goofballs."

Yes, this is the Daily Beast, where editor John Avlon claims his motto is "Nonpartisan, but not neutral." The real motto ought to be "We're liberal jerks, but we refuse to admit it."

Daly also lashed out at "deniers" Gov. Rick Scott and President Trump -- pushing a 2016 AP investigation claiming Trump defrauded his insurance company of millions over damage claims from Hurricane Wilma in 2005. Then he pitched his last sleazeball:

When it comes to property damage, residents who are relatively unhampered by integrity can try to follow the Donald Trump Method of Happy Hurricane Recovery.

“A very good insurance policy,” he was quoted saying after he pocketed the $17 million a dozen years ago.

But, as [Palm Beach deputy town manager Jay]Boodheshwar rightly says, nothing can be done when lives are lost.

And when warmer water and wetter air indisputably contribute to the killing power of a hurricane, climate change transcends politics. Loopy conspiracies and grasping greed cease to be forgivable. Inaction becomes a crime.

Meanwhile, the strongest hurricane on record in the Atlantic continues toward the playground of the deniers. Limbaugh may yet end up needing batteries and water.