It was not a Mensa meeting when Larry King interviewed British comedian Russell Brand in London about socialism and fascism, among other topics, on his Russia Today show Larry King Now on August 7.

Brand cast Trump as a grotesque figure – talk about the pot calling the kettle black – but said he at least seemed authentic. King shot back “But he’s authentic/not-authentic. Because, does he have a philosophy?”

Brand said that didn’t matter, but said Trump “has a kind of veracity. The only other figures that have it, I think, are Jeremy Corbyn, in this country, is an authentic man, I would agree he’s a principled and beautiful human being. Bernie Sanders, in your country, had a kind of integrity, but was stifled and contained and marginalized by this political process. I think that authenticity, to use the ludicrous pun, trumped the alternatives that seems more appealing to a liberal sensibility.”

KING: What is happening in the world? Are we going through some upheaval?

KING: What is it, though?

BRAND: I think it is a rejection of globalization and a return to nationalism as a result.

KING: There is a danger in that.

BRAND: Yeah, there is, of course, you have fascism as a kickoff. But also, nationalism isn't going to work at this point. Nationalism is a bogus ideology.

BRAND: All of these ideas are in service to political and financial elites. I think we are at an important point. The result of the last British election gives me some cause for optimism because there was a return to socialist values. [As if Corbyn won?] You know, socialism in the 1950's in your country was attacked so aggressively and so maligned that it is impossible for people to have a kind of an open view of it now, as simply sharing.

KING: Norway has that.

BRAND: What do they have?  Like a nice general socialism.

BRAND: It seems that would be the answer, doesn’t it, Larry?

KING: It does. But they only have 5 million people.

This caused Brand to go into a soliloquy about the notion of decentralized socialism – “what your man [Noam] Chomsky says,” he said to King. Then he added: “If the powerful continue to resist ordinary people having any form of power, there will be these bizarre, grotesque anomalies like Donald Trump or Brexit, or a return to nationalism, while people reach for identifiable symbols and recognizable narratives, unless there is significant and real change.” Then came the comedy: 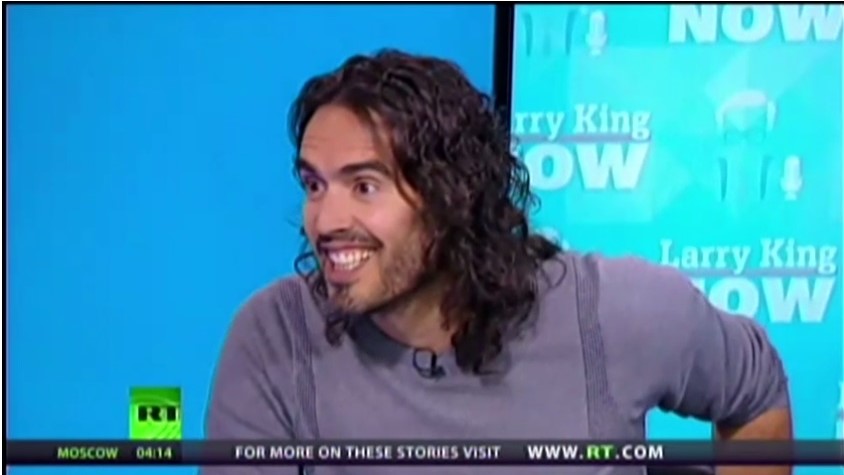 ING: You don't want it to turn fascist, though.

BRAND [protesting]: Larry!  I don't like fascism! Look at my hair! You can't have long-haired fascists. It’s a rule.

KING: You are almost Jesus-like.

BRAND: Exactly! And was Jesus a fascist? I don’t think so.

BRAND: Now’s a good place for a break, isn’t it? “You look like Jesus, and Jesus wasn’t a fascist.”

King and his producers actually put this Jesus exchange in a clip to open the show.