Lefty Columnist Leonard Pitts: Trump Is Like Hitler and ISIS, So Balance Is Immoral 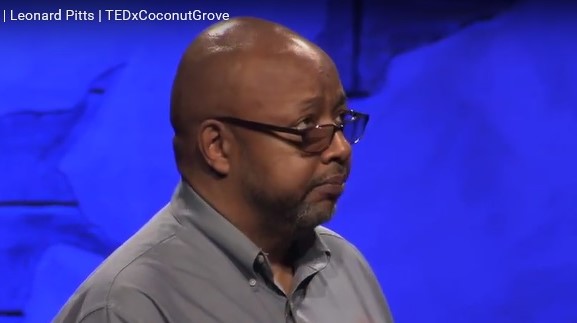 That, according to legend — and a Facebook page for alumni of the Miami Herald — was the routine response of an ’80s-era editor whenever some hapless reporter was working overly hard to bring “balance” to a story where none should exist, where the moral high ground was clearly held by one side or the other. I don’t know who the editor was, but that riposte brims with a wisdom sorely lacking in modern news media, obsessed as they are with the fallacy of journalism without judgment.

Pitts insisted that reporting on Trump's individual falsehoods without calling them "lies" is "like reporting on each individual drop of water that falls, but never mentioning the storm."

He also mocked Baker for suggesting no one cared about Hillary's record of lying: "likening Trump's untruths to Clinton's is like likening Kareem Abdul-Jabbar's scoring to Zan Tabak's. Abdul-Jabbar is the leading scorer in NBA history. You've probably never heard of Tabak, though he also played in the NBA and, once in awhile, scored a basket." (Tabak averaged 5 points a game over seven pro seasons.) Pitts continued:

Baker's is a mindset that has become all too common. With the obvious exception of certain partisan news outlets, some reporters, fearful of being tagged for "bias" on contentious issues, seek to safeguard themselves by ritually quoting a source from Side A and another from Side B while avoiding even painfully obvious conclusions. They call this "fair and balanced." It's actually gutless and dumb.

Isn't it something, how people who claim to stand against deliberate and malicious falsehoods can so quickly equate Trump with Hitler and with ISIS? Pitts concluded:

In these perilous times, with authoritarianism coming to the White House and bizarre untruths infesting our national discourse, that is a sin we can ill afford. No one ever had to remind Cronkite or Murrow of the need to speak the truth when the truth was plain and the moral imperative clear. No one should have to remind this generation of journalists, either.

For his part, Baker wrote a defense of his NBC remarks in the Wall Street Journal on Wednesday.

Immediately, my remarks were followed by another fit of Trump-induced pearl-clutching among the journalistic elite. Dan Rather, a former television newsman of some renown, weighed in to call the remarks "deeply disturbing." I will confess to feeling a little burst of pride at being instructed in reporting ethics by Mr. Rather. It feels a little like being lectured on the virtues of abstinence by Keith Richards.

That's a beautiful point. Baker took after the notion that he favors a "journalism without judgment." He favors offering readers the facts without trying to make every judgment for the reader.

The issue is not whether we reporters should test what he, or anyone, says against the known and established facts and offer a fair assessment of its veracity. We do that all the time. We have a duty to our readers to ascertain whether the people we report on are telling the truth. The question is how we present our reporting.

I believe the right approach is to present our readers with the facts. This does not mean presenting a false equivalence between one person's inaccurate statement and the observable truth, as though they were of equal epistemic value, but a weighing of a claim against the known facts. When Mr. Trump claimed that millions of votes were cast illegally, we noted, high up in our report, that there was no evidence for such a claim. No fair-minded or intelligent reader was left in any doubt whether this was a truthful statement.

But I'm not sure the story would have been improved by our telling the reader in categorical terms that Mr. Trump had told a "lie." In fact I'm confident that the story-and our reputation for trustworthy and factual news reporting-would have been damaged. The word "lie" conveys a moral as well as factual judgment. To accuse someone of lying is to impute a willful, deliberate attempt to deceive. It says he knowingly used a misrepresentation of the facts to mislead for his own purposes.

We could add that only a liberal ideologue cites crusading CBS partisans like Murrow and Cronkite when they're feeling self-righteous about bringing the liberal truth to the world.