NPR pop-culture reporter Sam Sanders acknowledged Hillary was throwing “zingers,” but he let the liberal New  York crowd set the stage: Trump was booed, and Hillary was greeted with big laughter. (Never mind that reporter Joe Concha of The Hill, who was there, noted Hillary was booed as well: "But as The Guardian described and my notes show, Clinton got some booing of her own. Not with the vitriol and volume Trump's detractors displayed, but it was apparent.") 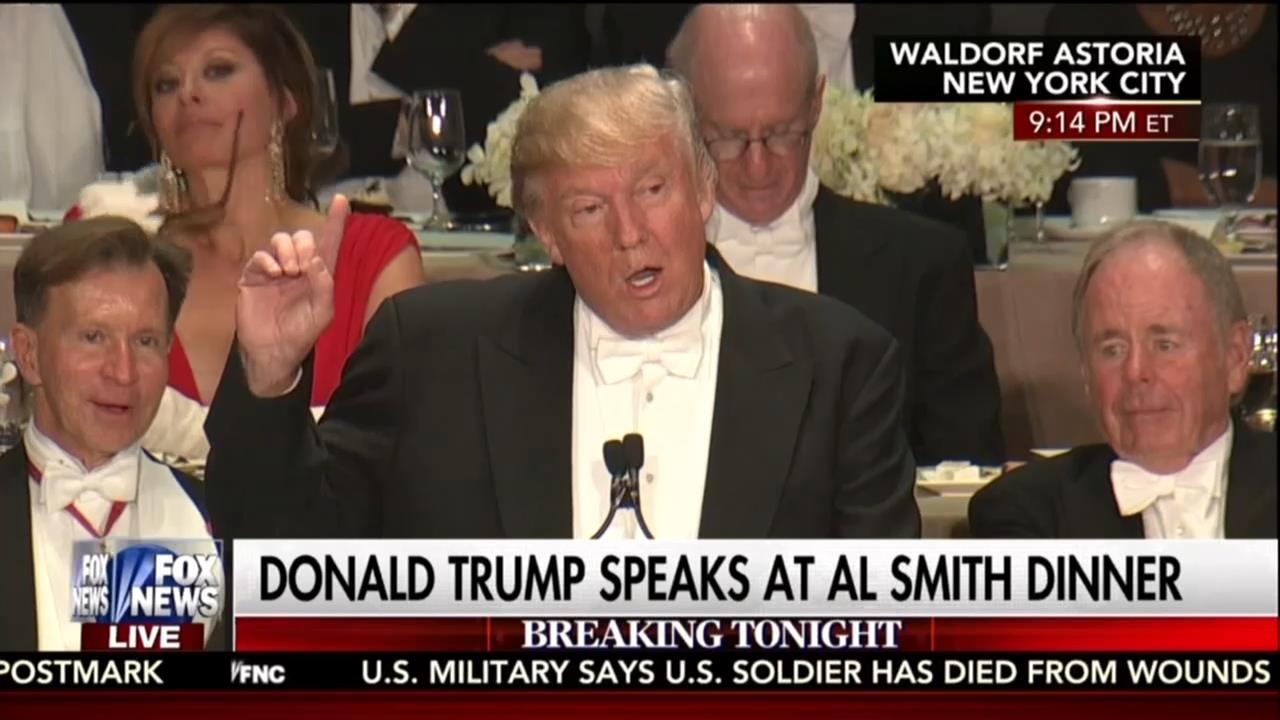 SANDERS: But about halfway through, Trump lost the room and began to draw boos.

TRUMP: Hillary believes that it's vital to deceive the people by having one public policy. (Booing)...And a totally different policy in private.

SANDERS: And then there were more boos after Trump alluded to leaked emails showing Clinton staffers disparaging conservative Catholics.

TRUMP: Here she is tonight, in public, pretending not to hate Catholics. (Booing).

SANDERS: Hillary Clinton smiled throughout, and when it was her turn, she hit her opponent pretty hard as well.

HILLARY CLINTON: It's amazing I'm up here after Donald. I didn't think he'd be OK with a peaceful transition of power. (Laughter)

SANDERS: Clinton joked that Trump would grade the Statue of Liberty on its looks, rating her a four.

CLINTON: Maybe a five if she loses the torch and tablet and changes her hair.

SANDERS: The room seemed to be more receptive of Clinton's zingers than Trump's, even when she compared Trump's health to the health of Vladimir Putin's horse - and even when she joked about the debate.

CLINTON: Donald wanted me drug tested before last night's debate. (Laughter)  And look, I've got to tell you, I am so flattered that Donald thought I used some sort of performance enhancer. (Laughter) Now, actually, I did. It's called preparation.

PS: Sam Sanders also boosted Hillary after the debate, defending her against Trump calling her a "nasty woman," which only made her cool like Janet Jackson:

And in all the online discussion, one Janet Jackson song seemed to be the biggest recipient of attention post-"nasty woman."

Social media began to reference the classic Jackson track "Nasty" from her breakout 1986 album Control, with signature lines such as, "No my first name ain't baby, It's Janet, Miss Jackson if ya nasty" and "Nasty boys don't mean a thing, oh you nasty boys."

...Could Donald Trump have ever thought that calling his opponent a "nasty woman" would reintroduce the nation to one of America's great moments in pop feminism? We may never know.