Washington Post media columnist Margaret Sullivan hammered NBC News in her Friday column for taking so long to find the Access Hollywood sex-talk tape. Like many pundits, Sullivan’s not sure this 2005 tape is a fresh discovery:

What if that campaign-changing video — or something equally incriminating — had emerged during the Republican presidential primary, instead of sitting on a shelf at NBC’s Access Hollywood?

And why did it take NBC News so long to break a story that took The Washington Post only five hours, from initial tip to publication? 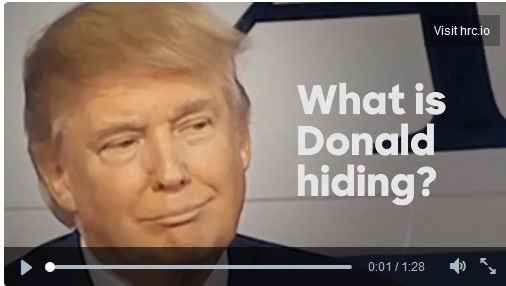 There's one easy answer: NBC, like other liberal networks, loved the double-whammy of scoring the high ratings of Trump interviews while allowing Trump to dominate the primary race and deny any media momentum to rivals, thinking Trump was the easiest patsy for Hillary to beat.

NBC and other liberal networks are politically savvy enough to know cynics will not believe you when you claim you suddenly discovered something touted as a political silver bullet with just a few weeks to go in the campaign. But that’s what they’re claiming.

Sullivan had an interview with Mark Kornblau, a spokesman for NBC News chairman Andrew Lack.  Kornblau claimed NBC had no knowledge until Monday, October 3, and denied reports that anyone in the news division knew about it last month when Billy Bush, who appears in the video with Trump, talked about it while covering the Olympics in Rio de Janeiro.

By the next day, Lack had read a transcript. “The immediate judgment was that it was of high news value,” Kornblau said.

“Tuesday was when the clock started,” and after that, the focus was on “how to do all the journalism and reporting, and asking what legal boxes needed to be checked.”

Kornblau said that NBC News had agreed to let its entertainment-side cousin, Access Hollywood, break its version of the story first — “as a courtesy” — because it was the source of the recording. That “probably, but not definitely” would have happened Friday night. If it hadn’t, it’s likely that the news division would have aired its story first, he said.

Kornblau denies there was any timeline on this, but between the Sunday debate and the “satire” opportunity of Saturday Night Live, cynics can presume the pressure was on....and so someone leaked to the Post. Whether that leak was seen internally as a breach – or cue the cynics again, an authorized leak to let a more substantive media outlet break the story – it was convenient for liberals to modify the whole tenor of the debate into moderators hammering Trump about the tape.

For her part, Sullivan thinks NBC hasn’t been half-aggressive enough against Trump, with this apparent gold mine of Access Hollywood items. She asked “ Why hadn’t NBC done a rigorous search of its own archives months ago?” (Cynic's answer: More proof that NBC Entertainment treated him like...an NBC star.)

Kornblau drew the distinction between news and entertainment sides of the corporation, saying that the news division had indeed scoured its own archives, for example, from Meet the Press, turning up stories along the way. But he said, what Access Hollywood has in its files “is not NBC News’s archive.” But it certainly was newsworthy.

The entertainment-news split at NBC seems to have caused plenty of trouble already.

If a corporate barrier between news and entertainment is keeping NBC’s journalists from digging in to newsworthy material, it shouldn’t be there.

In fact, it should have been torn down months ago.

Sullivan doesn't look backwards at whether the Post has ever sat on a sexual-harassment story. She touts how the Trump-tape story was done in an afternoon. On Friday afternoon, the Post rushed out a Trump accuser named Kristin Anderson, who couldn't remember the date or even the place of a 30-second incident where Trump was accused of touching her private parts under a miniskirt. It happened at a Manhattan nightclub with a red couch in the "early 1990s." Does that story sound ready to be published?

Now consider the Paula Jones story in 1994. At the time, Post investigative reporter Michael Isikoff ended up in a fight with national editor Fred Barbash. A March 25, 1994 Washington Times story reported: "Two sources at the paper said Mr. Isikoff was upset because he thinks the Post is burying his findings about sexual harassment charges leveled at Mr. Clinton by Paula Corbin Jones, an Arkansas state employee, at a Feb. 11 news conference."

The next day, Post Managing Editor Robert Kaiser countered in Howard Kurtz's Post "Media Notes" column that "Our role in a case like this is to examine an allegation made by a private citizen against a public official with some care...We have an obligation to the Post's readers to do our best to establish the truth and not simply to print damaging accusations the moment they are made."