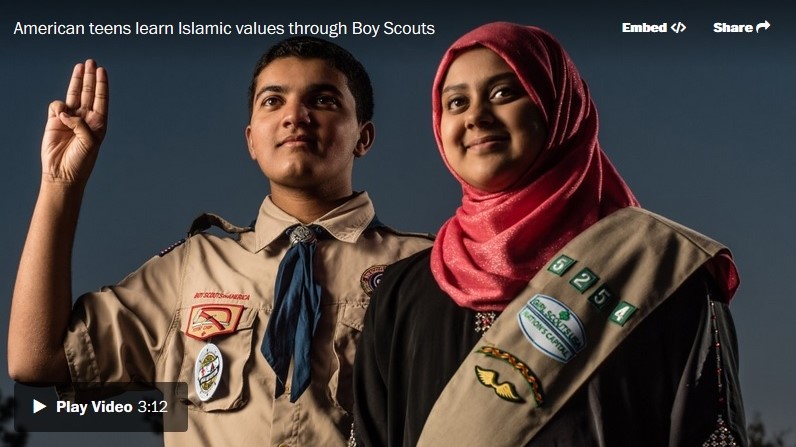 Sunday’s Washington Post Magazine had an anti-Trump cover story. Three Muslim boys and three Muslim girls (all wearing a jihab) appear in their Scouting garb on the cover with the text: “Be Prepared: Muslim American Scouts grapple with the Trump era.”

Throughout the piece, Post feature writer David Montgomery paired apparently outrageous quotes from Donald Trump (as well as Ben Carson, Ted Cruz, and Mike Huckabee) with Post rebuttals with all-American Muslim teenagers in Boy Scouts and Girl Scouts. It was all about "Islamophobia" clashing with American values:

Yet the wave of Islamophobia had brought on a new level of introspection in the Muslim American community about what the country was becoming, and what growing up in this political climate would mean for their children. Weren’t their sons and daughters honoring the same American ideals as the Scout troops in Liberty, Mo., and New Freedom, Pa.?

In a Post video, the reporter explained “Demonizing an entire religion has become a central theme for candidates.” Absolutely nowhere in this ten-page commentary did Montgomery let this political correctness clash with the opposing political correctness in the Scouts: liberals forcing gay Scouts and Scoutmasters on church (and mosque) sponsors of Scout troops.

No Muslim had an opinion on that subject? Or it just clashed with the Sunday propaganda?

The Muslim children profiled came from a mosque the Obama White House lavishes with attention, the All Dulles Area Muslim Society (ADAMS) in the suburb of Sterling, Virginia. At the very end came the part George Will once called “Morning in America goo.” Muslims are more American than Trump voters in their Make America Great Again hats:

A Girl Scout from the ADAMS Center sat down to write a letter to Trump. Her fifth-grade assignment had been to compose a persuasive formal letter to someone.

"My name is Bayan Sabri Hammad," she began. "I am a 10-year-old girl who feels that it is my duty as a Muslim and a United States citizen to stand up for justice, equality, and freedom of religion. I want to send this letter to you and your followers to say that I disagree with what you are saying about Muslims, and that you are fueling the rage of everyone else's hatred toward Islam."

She cited the Declaration of Independence and the Bill of Rights. She quoted the Rev. Martin Luther King Jr. and Mahatma Gandhi. She described the Muslim "teachers, coaches, volunteer workers and farm owners ... doctors, dentists, computer engineers, mothers and fathers" whom she knows.

"Some immigrants that come here, like your wife," she wrote to Trump, "dream of a place of safety and equality. To them, and to me, that's America."

"I just hope to open his eyes," Bayan said when she was done. "I guess I just want to inspire him."

Her letter was a reflection of what it is like to be a Muslim American Scout in the age of Trump. It is to cherish intensely certain ideals that, in less urgent times, might be taken for granted. By pointing out that reality, Bayan Hammad was trying to protect her community from the man who might be president.

She was being prepared.

In April, she mailed her letter to Trump headquarters in New York. Based on everything she has learned from the creeds of her troop, her religion and her country, she knew it would make a difference.