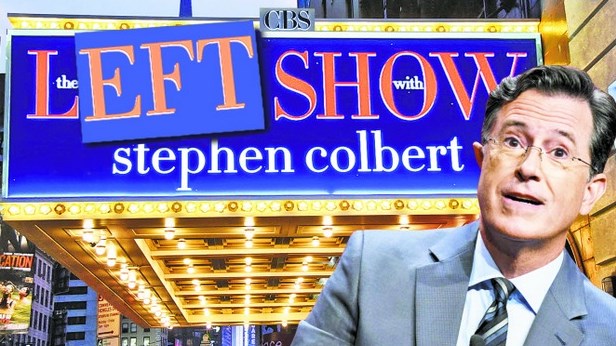 An hour into CBS’s “upfront” pitch to advertisers last Wednesday in New York’s Carnegie Hall, the network turned to late-night comedian Stephen Colbert for jokes, and he mostly laid into Donald Trump. This may or may not be a joke from the liberal host: “2016 has been a very big year for comedy, and if Trump wins, 2017 will be an even bigger year for tragedy.”

The Hollywood Reporter listed some of Colbert’s other political wisecracks from the session:

– "CBS is also the home of great reality shows like Big Brother, Survivor and, thanks to the coverage of Donald Trump, The Amazing Racist. I went almost a minute without mentioning him. I think I just doubled CNN's record."

-- "A new poll that came out yesterday says that 87 percent of Republicans are supporting Donald Trump. The other 13 percent are currently standing on bridges, looking vacantly into the distance. Eighty-seven percent is pretty amazing. He is slowly unifying the Republican party. All it took was no other options. Then, a few more weeks to make sure there are really no other options? Have we checked?"

– "On the Late Show, we don't just talk about candidates like Trump, Bernie and Hillary — I talk to them. On my very first episode, I interviewed Jeb Bush for 12 minutes. That's right, I had him on for half of his entire campaign."

– "I also talked to Joe Biden, Paul Ryan, Elizabeth Warren — it's a regular Who's Who of who you wish was running for president."