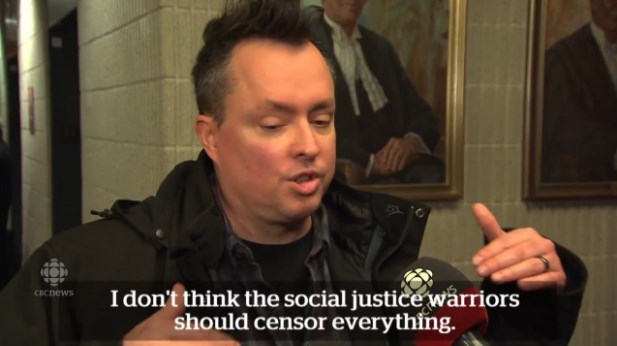 Freedom of speech often seems like an optional concept up north in Canada. CBC News reports that an upcoming awards gala on Radio-Canada canceled a comedy sketch about freedom of expression, since an insurance company hired by the event’s producers “repeatedly asked the comedians to alter the content of the sketch.”

Quebec comedian Guy Nantel wrote the sketch with Mike Ward, “who is known for his cutting and often vulgar jokes.” Ward is currently the subject of an ongoing human rights complaint for jokes he made about “a well-known child singer with a condition that causes facial disfigurement.”

Ward calls himself “edgy,” but he can cut like a knife. The singer, Jeremy Gabriel, performed for the Pope. Ward joked he was happy the singer got all that attention. "But now, five years later, and he's still not dead.… Me, I defended him, like an idiot, and he won't die," Ward said.

The sketch that was censored begins with Ward telling Nantel he's afraid to tell jokes after his run-in with the human rights tribunal.

Nantel then says: "Don't be afraid, people can take a joke."

Ward replies: "Tell that to the Human Rights Commission. Here's a joke they wrote for me: 'What's the difference between a homosexual and an Inuit person? There is none, both are fantastic! Long live diversity!'"

It continues with a series of jokes that refer to lesbians, Jews and Tim Hortons cashiers, but all in the vein of poking fun at overzealous political correctness....

"Radio-Canada's insurance company told them they were at high risk of being sued if they allowed our sketch to go to air," Nantel said.

He said the insurance company apparently had concerns about almost every element of the sketch.

"They repeatedly asked us to soften material on the Human Rights Commission, religious groups, homosexuality. They took out everything until there was nothing funny left," Nantel said....

He said the whole point of the sketch was that political correctness is out of control; the reaction to it simply proves that point.