Lester Holt Hammers Trump Repeatedly, But Asked Hillary If Her 'Feelings Get Hurt'

On Wednesday night, NBC Nightly News anchor Lester Holt anchored the newscast from Trump Tower, which seems kind of silly since it’s four minutes away from NBC’s studios at Rockefeller Center. No one should mistake this for some kind of scandalous act of deference. Holt whacked Trump with tough question after tough question.

For scandalous deference, we take you back to Brent Baker's report on Holt on January 29 with the other presumptive major-party nominee, Hillary Rodham Clinton. He “winced” when anyone dared to suggest she’s dishonest.

LESTER HOLT: I want to ask you about a moment at the town hall the other day. A young man, a Bernie Sanders supporter, stood up and said young people don’t trust you.

TAYLOR GIPPLE, CNN TOWN HALL ON JAN. 25: I’ve heard from quite a few people my age that they think you’re dishonest.

HOLT: And when he said that I winced. And I was wondering, you’ve obviously been in tough  battles, political battles, but do you get your feelings hurt sometimes?

Holt’s next question: “What frustrates you the most about perceptions about you?”

This is a dramatic contrast with Holt vs. Trump. It's remarkably comparable to Brian Williams grilling George W Bush in the hot sun vs. Five Guys burger runs with Obama. See the contrast?

HOLT: You were sitting here watching the top of the broadcast with us. You saw images of Republicans burning their Republican registration cards. So angry at the idea of you representing the party. What did you think when you saw that?...

HOLT: You're speaking to the whole country now. You said things that shocked people, outraged people, about a temporary ban on Muslim immigration, to your characterizations of Mexican immigrants. Those things worked for you. They resonated. They worked. They got you to where you are today. But as you try to appeal to the entire country, do you stand by them? Do you stand, for example, behind the idea of a ban against foreign Muslims coming here?...

HOLT:  It sounds like an urgent problem, is that a first hundred days---

HOLT: You’ve also promised to deport those in the country illegally. Do you stand by that?...

HOLT: Your negatives are staggering. Disapproval 69% women, African-Americans, 88%, Latinos 79%,  people under 34, 75% disapprove. How much of that is self-inflicted by some of the rhetoric from the primary campaign, and how do you heal that while still respecting those who got you here?

HOLT: Tell me how the audit is going. You have not released your tax returns. You've talked about an IRS audit, still going on?

TRUMP:  It's still going on. And they go on for a long time. Honestly, it's very unfair. I've been audited every year for 13 or 14 years. Every year I get audited. I will absolutely release my returns when the audit ends.

HOLT: Nothing in those returns you think that might make your supporters raise an eyebrow?

Holt had the opportunity to at least ask Trump some questions that are new. Instead, Holt just reran Savannah Guthrie’s routine from last December with a set of “you’re not going to lower yourself to pushing Bill’s alleged sexcapades” questions or raising other Clinton scandals the media would rather not revisit:

HOLT: You've said a number of times that you haven't started on Hillary Clinton. So start on her. Give me three words that you would use to define her, that you will use as you press forward.

TRUMP: Well, you know, bad judgment is a couple of words that we could use. And that we use by Bernie Sanders. Bernie Sanders said she's not qualified to run for president because she suffers from bad judgment. I think that's true. All you have to do is look at the e-mail scandal. She's under FBI investigation now. And maybe she'll survive because the Democrats are protecting her. But that's the only reason she'll survive. 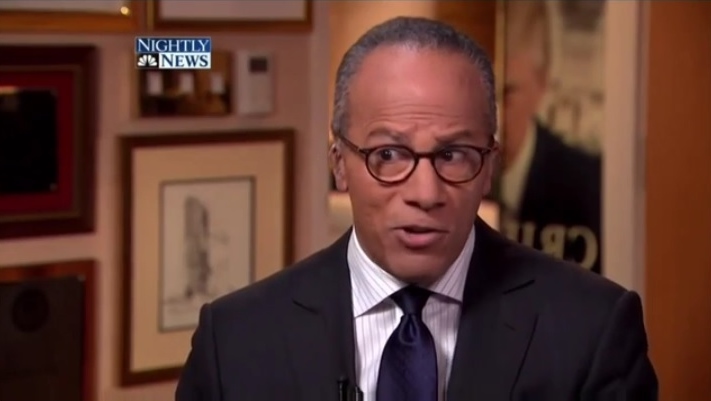 TRUMP: I'll see what they do with me. If they are fair, I'll be fair. We’re going to have a high-level campaign, I'd like to see that.

HOLT: Bill Clinton will he be part of this?

TRUMP: If they are fair with me, I’m going to be fair with them. Otherwise he becomes part of it.

HOLT: So you would bring it up, though?

TRUMP: I would bring it up depending on what they bring up. It depends. I'd like to see a very high-level policy oriented campaign. If they treat me properly, I'm going to treat them properly. It would be a beautiful thing to see. You don't see it often, but I would like to see it.

HOLT:  She today used the term "loose cannon" in describing you. Noted that loose cannons misfire. She talked about your blustering and bullying. What's your response to that?

TRUMP:  It's a nasty term that was given to her by one of her pollsters, I guess. The fact is, we need strength in this country. She's not strong.