One obvious sign liberal journalists are already missing Obama? Celebrating him as a comedian. Washington Post gossip Emily Heil is a big fan of his comedic stylings, as the headlines proved:

– “For presidential humor, Obama will be a hard act to follow” (Style section)
– “HE’S A REAL STAND-UP GUY: As he prepares for his final White House correspondents dinner, Obama has already demonstrated his knack for edgy, self-aware humor.” (Cover of the Express, the free Post commuter tabloid)
– “Our first comedian-in-chief: Sly and self-aware, Obama raises the bar for presidential humor.” (Express story inside)
– “Barack Obama, the first alt-comedy president” (online headline)

Online, Heil also presented “President Obama’s 10 most hilarious lines from the White House correspondents’ dinners.” Heil began by suggesting Obama was so much hipper (isn’t this another way to say blacker?) 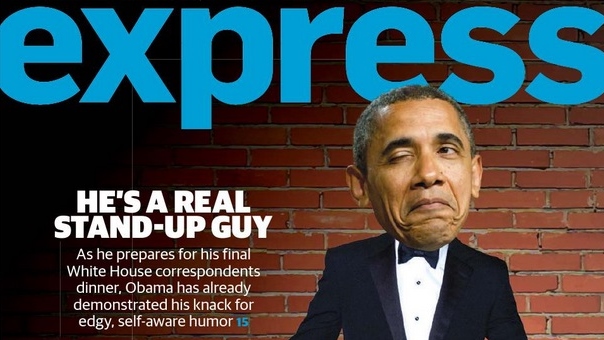 For a long time, presidential humor was predictable as a knock-knock joke. Then along came President Obama, dropping the word “heezy,” mimicking viral memes, and quipping that he and Joe Biden are so close, they’d probably be denied service at an Indiana pizza joint.

Obama, who will take the stage at the annual White House Correspondents’ Association Dinner on Saturday to deliver the traditional joke-filled monologue — the eighth and final of his administration — has a comic sensibility that’s edgier and more pop-culture-influenced than we’re used to hearing from politicians.

From the dinner dais, he’s made reference to drunk-texting and The Hunger Games. He’s used the phrase “piss off” and flirted with even bluer material. (Does he have a bucket list for his final year? “Well,” he quipped at the 2015 dinner, “I have something that rhymes with bucket list.”) Outside the dinner, he’s mocked the New York Times food section on Twitter (“respect the nyt, but not buying peas in guac”) and sparred with Zach Galifianakis on his culty Between Two Ferns faux-talk show.

If you read these lines off to people on the street without a source, would anyone marvel at “not buying peas in guac” and rhyming with “bucket list”? Talk about grading on a curve. Heil also gushed over Obama's joke at the turkey pardon: "Time flies, even if turkeys don't." She wasn’t finished:

He might not be the first truly post-racial president after all — but Obama is arguably the first postmodern humorist to hold the office.

It took Heil 14 paragraphs to acknowledge the obvious: Obama has joke writers to make him funny. Is it really that hard to please a roomful of liberal journalists who voted for you? Or did he have them at "Hello"?

"The president’s reputation as a funny guy is, of course, partly courtesy of the professionally crafted material he reads off the Teleprompters," Heil wrote, but turned quickly to former Obama speechwriter David Litt for spin. You see, Obama "tweaked" the jokes so masterfully.

Writers consult with the president in the weeks leading up to the dinner to get a sense of the punchlines he likes — and those he doesn’t. Then the boss tweaks the final version. “He would make these little, small changes, but they would make such a difference,” Litt said. “They would punctuate the joke in a way that made it work better, or replace a phrase with a slightly better phrase.”

Obama has gotten plenty of unscripted laughs, too. During last year’s State of the Union address, Republicans cheered after he said he had no more elections to run. “I know, because I won both of them,” Obama zinged back. Those mic-dropping words didn’t appear in the advance copy of his remarks.

Again, you have to be a liberal to find that enjoyable instead of arrogant. Heil also tweeted her praise: 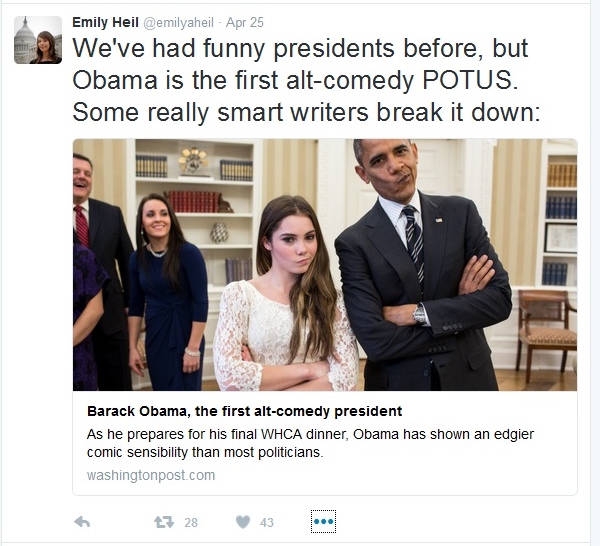 Her experts were unanimous:

“He has great timing, and that is something you cannot fake,” said Stephanie Laing, a former executive producer and director of HBO’s Veep and the founder of the online women’s comedy platform PYPO. “He’s not goofy. It’s a quiet, very sophisticated humor.”

No less an expert than Seinfeld himself praised Obama’s comedic skills. He included the president in his series Comedians in Cars Getting Coffee, insisting that Obama is, in fact, a professional. “He’s done some really good work as a monologist at those correspondents’ dinners — that’s how he qualifies to be on the show,” Seinfeld said.