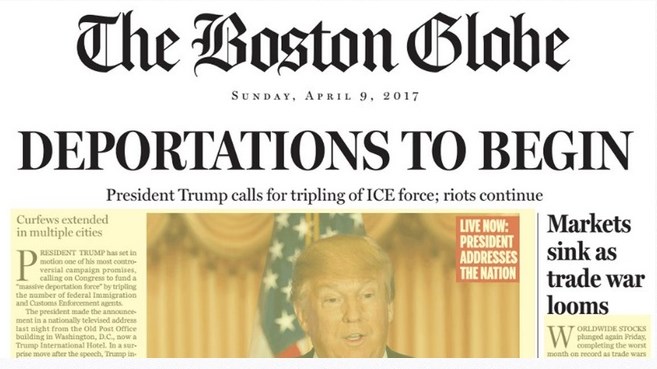 Sunday is not April Fools’ Day, but The Boston Globe is running an enormous prank – a fake front page dated April 9, 2017 satirizing President Trump. (The PDF is here.)

Can anyone imagine the outrage that liberal media pundits would have had if say, The New York Post or The Washington Times had created a fake page predicting that President Obama would force people off the insurance they wanted to keep, and food stamp use would soar by 70 percent? Imagine those complaints and transfer them to this: A serious newspaper doesn't satirize the news. It leaves it to The Onion.

Other stories on the fake front page include “U.S. soldiers refuse orders to kill ISIS families” and details such as new libel laws targeting “absolute scum” in the press. Another story is about how Trump had offended the Chinese first lady by naming his new dog after her.

An editor’s note at the bottom of the page explains why the paper chose to create it.

"This is Donald Trump’s America. What you read on this page is what might happen if the GOP frontrunner can put his ideas into practice, his words into action. Many Americans might find this vision appealing, but the Globe’s editorial board finds it deeply troubling,” the editor’s note reads....

In an email, the Globe's Sunday Ideas Editor Katie Kingsbury said the goal was to start a conversation and get voters who haven't voted yet to have a clear view of the future.

"This is an exercise in taking Donald Trump at his word. We decided to report out the policy positions he's pledged, to fill in the details, and to play out his vision to its natural consequences. Our goal is to create a conversation about what a Donald Trump presidency could look like and the vision he has for America's future," Kingsbury said in an email, noting that the popular sense of a Trump campaign unraveling is "wishful thinking."

"There is almost no way Ted Cruz arrives at the convention this summer with a majority of delegates. And there are still several major primaries on the horizon — New York, for one — where Trump has solid momentum. We want Americans still considering candidates going into the voting booths with a clear view of the presidency they are choosing," she said.

For the #NeverTrump conservatives, it should be added that the Globe also hates Ted Cruz, and in its editorial deepens the resentment against Mitt Romney and Paul Ryan by suggesting them instead:

"If the party can muster the courage to reject its first-place finisher, rejecting the runner-up should be even easier,” the editorial states. "The Republican Party’s standard deserves to be hoisted by an honorable and decent man, like Romney or Ryan, elected on the convention floor. It is better to lose with principle than to accept a dangerous deal from a demagogue.