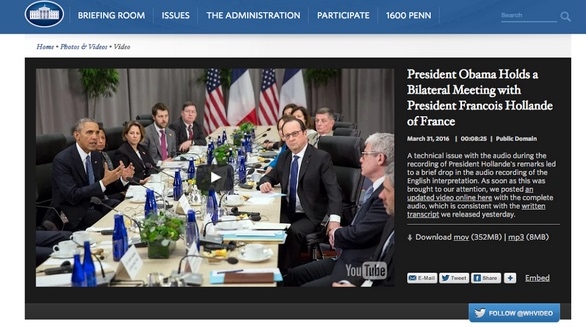 On April 1, MRCTV Editor-in-Chief Craig Bannister and his team found a fascinating case of Obama House censorship of French president Francois Hollande’s mention of “Islamist terrorism.” The White House posted a video of a bilateral meeting on Thursday of Obama and Hollande at the Nuclear Security Summit in Washington, but the audio dropped out precisely when Hollande's speech became uncomfortable for the White House.

This story was a staple of weekend news coverage on the Fox News Channel, and Rush Limbaugh shared the MRCTV scoop on Monday. But the liberal media couldn’t locate this story with both hands. ABC, CBS, NBC, CNN, PBS, and NPR haven't touched it. MSNBC sort of involuntarily aired it when a conservative guest briefly mentioned it on Saturday morning.

Liberal newspapers haven't yet noticed the Hollande-scrubbing story, unlike the New York Post, The Washington Times, and Investor’s Business Daily.

This is the segment of Hollande’s speech (in French) that somehow couldn’t be heard:

Via MRCTV's Ben Graham, here is the censored audio track:

After they were caught, the White House posted an explanation claiming “a technical issue with the audio during the recording” caused the lost audio...but they later posted a video with an intact audio of the inconvenient part of the text:

A technical issue with the audio during the recording of President Hollande's remarks led to a brief drop in the audio recording of the English interpretation. As soon as this was brought to our attention, we posted an updated video online here with the complete audio, which is consistent with the written transcript we released yesterday.”

But, as Bannister explained, a review of the sequence of events shows the White House audio alibi doesn't hold water:

1. Shortly after the event on Thursday, the White House posted video and an accurate transcript of Hollande's comment, so they must've used a full-audio version of the video. Friday morning, the original video was pulled and replaced with the message that "This video has been removed by the user."

2. The video was then re-posted, with the audio of Hollande's "Islamist terrorism" comment missing.

3. After MRCTV exposed the missing audio, the White House posted its explanation - but, left the missing-audio video posted, telling readers they could click on a link to a sub-page where the "complete audio" version was buried.

4.  By Saturday, the tainted video was finally replaced on the White House Video Gallery page.

Thus, the White House had the "complete audio" video all along, because it used it to create the official White House transcript, so it appears there wasn't the alleged "drop in audio" during recording.

Here are a few mentions of the Hollande audio-gap story.

Rush Limbaugh credited the MRC for uncovering the censorship:

Fox News mentioned the MRC on Monday's edition of Outnumbered:

VIDEO: We got a shout out from @FoxNews for our story exposing WH censoring French Pres. Hollande saying 'Islamist' pic.twitter.com/7l5NaVCJqx

Bre Payton, a writer for the conservative website The Federalist, tagged Obama for censorship on MSNBC: