NBC Meet the Press host Chuck Todd clearly brought the Tim Russert tactics to his interview with Senate Minority Leader Harry Reid, who bizarrely claimed his career has been dedicated to preventing obstruction.

Then he noted: “And yet, 11 years later, you wrote this: ‘The Senate's constitutional duty to give a fair and timely hearing and a floor vote to the president's Supreme Court nominee has remained inviolable.' I guess I'm confused. Which is it? What has changed from 2005 when you said, ‘There was nothing in the Constitution that said a vote,’ to 2016?

Reid replied “What I have tried to do during my entire career in Congress and in the Senate is to get rid of obstruction. And what we've found the last eight years especially with Republicans, Boehner first and McConnell, is everything was obstructed. That was what they set out to do. And they've done a good job of it. But we have always tried, and I have been part of that for many years, to get rid of obstruction. I don't believe in it.”

Todd was prepared to keep the attention on Reid’s history, as when they strangled the lower-court nomination of Miguel Estrada because they feared Bush would make him the first Latino appointee to the Supreme Court: “Well then what happened in 2005? I can quote you during the Miguel Estrada hearing. You said, ‘There's no reason to mince words around here. We're not going to allow an up or down vote on Miguel Estrada.’ That's a form of obstruction back when President Bush was in office.”

Reid lamely claimed that at least Estrada had a hearing, although he had proclaimed no vote would take place. 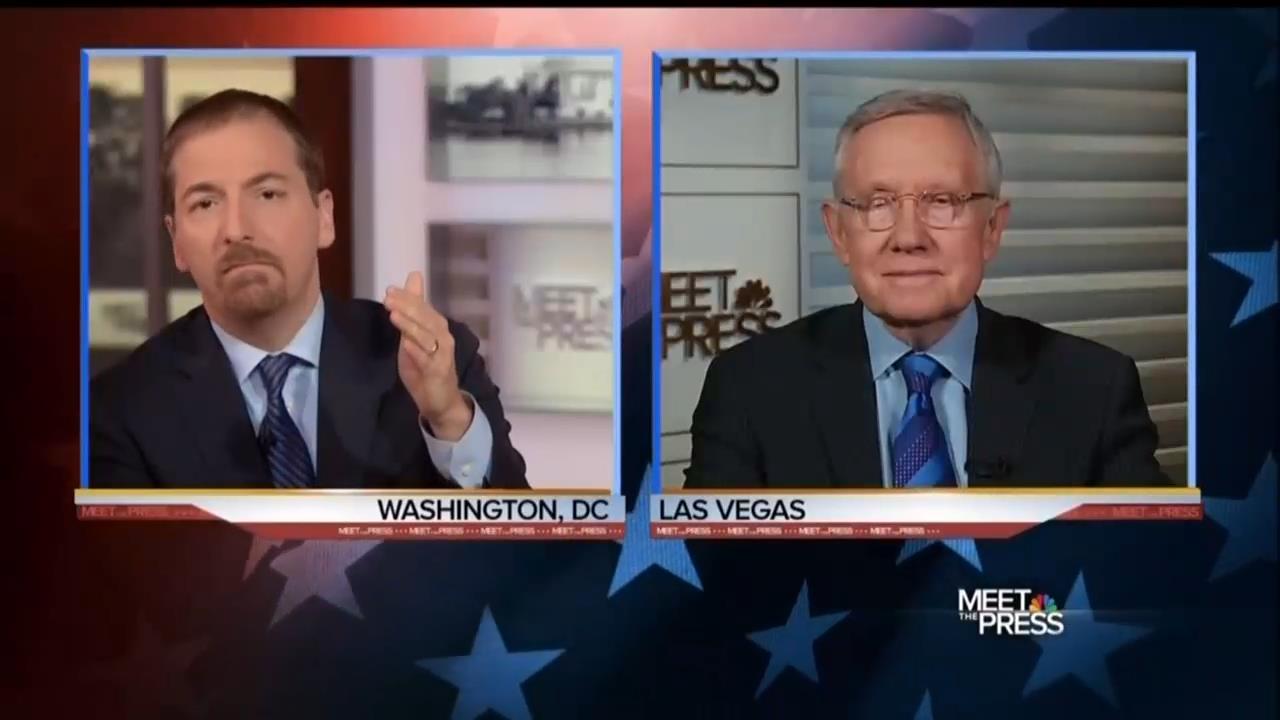 TODD: But I guess I'm going back to, what part of-- what has changed, other than the political party affiliation of the White House?

REID: What has changed is, you have to look at what has happened. We have never held up a Supreme Court nomination. Since 1900 in a lame duck session, there have been six they've all been approved.

TODD: But wait a minute. Alito. You did a filibuster for Alito and Roberts.

REID: Where is Alito today? He's on the Supreme Court. That's the point--

TODD: It failed. It failed, but you wanted one.

Todd did the same thing with Senate Majority Leader Mitch McConnell, a 2008 clip of McConnell complaining about the Democrats shutting down lower-court confirmations that year. “I started my interview with Harry Reid with a similar quote from him, back during the Bush years too. Essentially, you guys have changed places in your position on Supreme Court vacancies. And it seems to me, the only difference is the political party affiliation of the White House.”

McConnell wasn’t as bizarre as Reid, admitting partisanship: “Nobody's been entirely consistent. So let's just look at the history of it. It hasn't happened in 80 years, and it won't happen this year. The principle involved here, Chuck, when an election is underway, as Joe Biden was talking in 1992, an election's underway, the American people are about to weigh in on who's going to be the president. And that's the person, whoever that may be, who ought to be making this appointment.”

TODD: He writes this, conservative George Will, “The Republican party's incoherent response to the Supreme Court vacancy is a partisan reflex in search of a justifying principle. The multiplicity of Republican rationalizations for their refusal to even consider Merrick B. Garland radiates insincerity." What do you say to George Will?

SEN. MITCH MCCONNELL: Well, I just disagree with him. I think when you've got a nominee that MoveOn.org is extremely enthusiastic about, and multiple articles pointing out that if Judge Merrick were in fact confirmed, he would move the court dramatically to the left. I just disagree with George Will.

At show's end, Todd told the political panel, "I think there's more of a chance for hearings than you realize, but it's in the hands of the political-- uh, what-- the political standing of Chuck Grassley in the next six weeks. We'll see if these work."