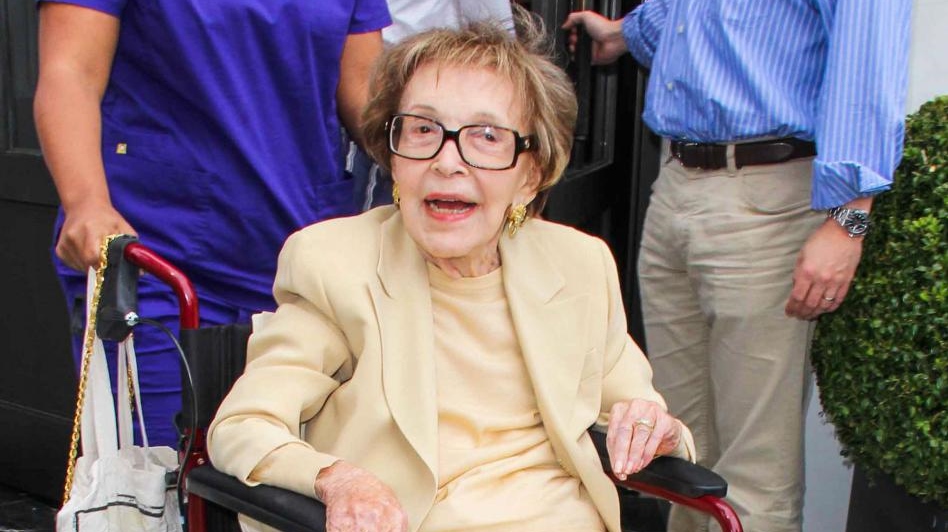 Zak implied that somehow Mrs. Reagan lifted no fingers on AIDS – and neither did her president’s entire administration.

“There’s no moral middle ground,” she said. “Indifference is not an option.”

Reagan’s vocal crusade against one scourge, and her relative silence on the other, adorn her legacy with complications, in this week after her death at 94.

This passage implies there was no such thing as AIDS research funding in the 1980s:

In 1986, President Reagan signed the Anti-Drug Abuse Act, which appropriated $96.5 million solely for the construction of more prisons.

No was the only thing gay Americans and first-time drug offenders were hearing from Washington.

Zak's story never gets around to mentioning AIDS funding and its actual skyrocketing trajectory when the Reagans lived in the White House. That would ruin the spin. Now the reality, as Brent Bozell explained after they trashed him in the days immediately after his death:

AIDS funding skyrocketed in the 1980s, almost doubling each year from 1983 - when the media started blaring headlines - from $44 million to $103 million, $205 million, $508 million, $922 million, and then $1.6 billion in 1988. Reagan's secretary of Health and Human Services in1983, Margaret Heckler, declared AIDS her department's "number one priority." While the House of Representatives was Democrat-dominated throughout the 1980s, which Democrats would quickly explain was the source of that skyrocketing AIDS funding, Reagan clearly signed the spending bills that funded the war on AIDS.

It's also wrong that Reagan didn't utter the word "AIDS" until 1987. Any reporter who bothered to check facts would find that Reagan discussed AIDS funding in a 1985 press conference, just for starters. But let's turn that around on the rest of Washington. Does that mean no reporter asked Reagan about AIDS in the 1984 presidential debates? And that every interview President Reagan granted to a national or local media outlet failed to solicit Reagan's opinions on AIDS until 1985? Using this phony-baloney spin line - that federal policy hinges exclusively on the presidential bully pulpit - is an exercise in liberal hyperbole over hard data.

And then, this nugget of research from 2014:

Now, try finding Walter Mondale "mentioning AIDS publicly" when he ran against Reagan in 1984. It didn't come up in the presidential debates. It's nowhere to be found in his 1984 convention speech. A Nexis search of the Washington Post and The New York Times in 1984 doesn't locate a Mondale quote on AIDS.

Obviously, Zak was more interested in trashing a dead First Lady than spending any time in his own newspaper’s morgue. He might have found a few clues about how his hyperbole about “inaction” didn’t match the governing reality.

Clint Hockenberry, a spokesman for the AIDS Vigil Commission, said 17 similar vigils were being held in large cities across the country last night.

"We need to fund research to find out more about AIDS. Studies need to be done to determine how diseases are transmitted. There's not enough information on how this disease is contracted and how it can be treated," Hockenberry said.

"If AIDS is a national health emergency, as Secretary of Health and Human Services Margaret Heckler declared it is, then we want to see adequate funding that will help us to respond to this emergency," Hockenberry said.

Federal spending in connection with AIDS research and treatment has jumped from $2.5 million in 1982 to $96 million this year. Last week, Health and Human Services Secretary Margaret Heckler asked Congress to boost by 50 percent its 1986 appropriation to $126.3 million. Heckler has repeatedly called AIDS the nation's No. 1 health problem, but to the bitterness of many gay activists and public health officals, President Reagan has never publicly mentioned the disease.

Rock Hudson has donated $250,000 and oil magnate John Paul Getty Jr. $100,000 to the newly formed American Foundation for AIDS Research, Elizabeth Taylor announced Thursday. Taylor added that Nancy Reagan has offered her support to the foundation. The first lady reportedly sent Taylor a personal message of support, saying she was pleased to learn of the foundation and is confident it will "prove to be a very important step in solving" the disease.

But, then the AIDS activists joked about Mrs. Reagan dropping dead, as the Post also documented on November 14, 1986:

For San Francisco audiences watching the new play Unfinished Business: The New AIDS Show in 1984, it must have seemed as much therapy as theater. A series of comic, dramatic and musical sketches about how people have confronted and coped with AIDS, the play is now the subject of a documentary airing tonight at 10 on Channel 26 [PBS station WETA]. It remains an intimate, raw experience.

Much of the show is, of course, painfully sad, but a surprisingly large part of it is barbed and humorous. One character remembers scattering the ashes of his closest friend, then pauses, smiles and says: "Talk about fairy dust!" Another speaks of the day when he couldn't bear to watch his friend suffer any more and looked up to the skies to plead, "Don't take him! Take me instead!" His dying friend comforted him: "You know you don't mean that."

"I said, 'You're right,' " says the actor, and again directs his pleading eyes to the heavens. " 'Take Nancy Reagan!' "

Dan Zak will probably not write a nasty article in the years to come on how often Michelle Obama spoke out against Christians having their heads sawed off by ISIS in the Middle East. No one in the liberal media would take the nasty short cut of measuring words in the press as a measure of First Lady caring and compassion – when she is a Democrat.

But with Reagan and AIDS, liberal reporters love to Xerox the vicious Larry Kramer story line that the Reagans wanted everyone with AIDS to die, and silence was a  weapon to murder them. Nancy’s “silence” on the AIDS issue via media coverage is a reason to kick dirt on her new grave:

In fact, the Reagans spent most of the 1980s silent on the issue. [Hillary] Clinton apologized hours later, saying she “misspoke” — but she had already unleashed a torrent of criticism, inflaming an antipathy toward the Reagans that has long smouldered.

Nancy Reagan wasn’t president, but she was a symbol, a spokeswoman, with her own kind of power. And she was damned by some for her actions on one issue — a drug policy stance that many viewed as simplistic — and damned for her inaction on another.

Zak lined up a conga line of leftist to denounce Mrs. Reagan for “simplistic” opposition to drug use. “I think Nancy Reagan was well-intentioned but ultimately became an unknowing pitchwoman for a vicious, draconian drug war,” professor Marc Lamont Hill proclaimed, with no identification he’s a big-time lefty who worked for the Huffington Post.

Then came the professor of “gender studies” to stick in another knife: 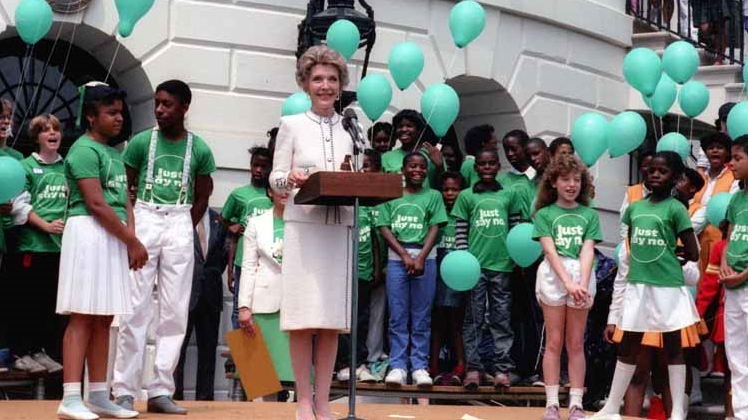 “There’s a way you could equate ‘just say no’ with actually doing nothing,” says Jennifer Brier, a professor of history and gender and women’s studies at the University of Illinois and author of Infectious Ideas: U.S. Political Responses to the AIDS Crisis.

“Abstinence as a way of dealing with drugs was absolutely akin to the policy of the Reagan administration about AIDS: They’re both negative arguments — or calls for abstinence or not doing something — as opposed to acknowledging the reality” — which is that people will have sex or abuse substances, Brier says, and people should figure out how to make that behavior safer.

This is what the libertine Left always saw as the answer: pile up the free condoms and set up the needle exchanges for the heroin users, because there is no behavior you should condemn on sex and drugs. All the condemnation is left for people who eat meat and shoot guns.

Finally, Zak's nasty spin is demonstrated as he recounted an attack mounted by gay activists -- and investigated by gay reporter Chris Geidner -- that Mrs. Reagan refused to help Rock Hudson get admitted to a hospital in France.

Elizabeth Taylor wrote a letter to Nancy Reagan encouraging her to make an issue of AIDS; the first lady's response was "frosty," according to Vanity Fair. [See 1985 Washington Post quote above.] When Rock Hudson was dying of AIDS in France in 1985, a plea for medical help was rebuffed by the White House, according to correspondence unearthed last year by BuzzFeed's Chris Geidner.

"I spoke with Mrs. Reagan about the attached telegram" from Rock Hudson's people, wrote Mark Weinberg, special assistant to the president, in a memo. "She did not feel this was something the White House should get into."

Was she being cautious about giving preferential treatment to a pal? Or was she nervous about taking action on an issue that her husband had yet to formally address in public?

If Zak had wanted to truly summarize Weinberg instead of exploit him, he could have made fairer use of Weinberg’s memory. This is what Geidner reported in more detail:

He told BuzzFeed News that he couldn't recall precisely what the former first lady said, but he did remember that she agreed with his recommendation, saying that they "had to be fair" in terms of treating Hudson the same as anyone else. Weinberg noted that when the White House begins making calls on something "then things happen."

"The view was, 'Well, we're so sorry' - and she was, they were both very sorry for Rock's condition and felt for him and all the people - but it just wasn't something that the White House felt that they could do something different for him than they would do for anybody else," Weinberg said.

So, in a memorandum to Bill Martin, a special assistant to Reagan with the National Security Council, Weinberg then summarized the situation and his call with the first lady.

"I spoke with Mrs. Reagan about the attached telegram. She did not feel this was something the White House should get into and agreed to my suggestion that we refer the writer to the U.S. Embassy, Paris," he wrote at the time.

"That refers to special treatment for a friend or celebrity. And that's all it refers to. It had nothing to do with AIDS or AIDS policy or - that's a whole different issue. We weren't talking about that," Weinberg told BuzzFeed News. "I know, I know that conversation," he added, referencing long-standing criticism of the Reagan administration's response to AIDS.

In his memo to Martin, while Weinberg noted that the White House would not be intervening in Hudson's attempts to see Dormant, he added that the president had personally called Hudson. Also, the press should be informed of the call: "Mrs. Reagan asked, however, that we inform the press of the President's telephone call to Rock Hudson today, which I did."

UPDATE: Marc Lamont Hill contacted me on Twitter to explain he is no longer employed by the Huffington Post. I changed the copy to reflect that fact.