Evan Gahr of the Daily Caller notes that The Washington Post and their race/gender reporter Janell Ross falsely claimed on Tuesday that Donald Trump “failed on national TV to resoundingly reject the support of David Duke," ignoring a Tuesday morning phone interview on ABC.  At 4 pm, Ross posted an article that began like this:

In the past 48 hours, Donald Trump has failed on national TV to resoundingly reject the support of David Duke, a former member of the KKK and white supremacist radio host. He’s said he could not hear the question well. His supporters insist he did distance himself from Duke on Friday. But these people either do not care or are not aware of Trump's long and also recent history of rather equivocal statements about Duke and the KKK. 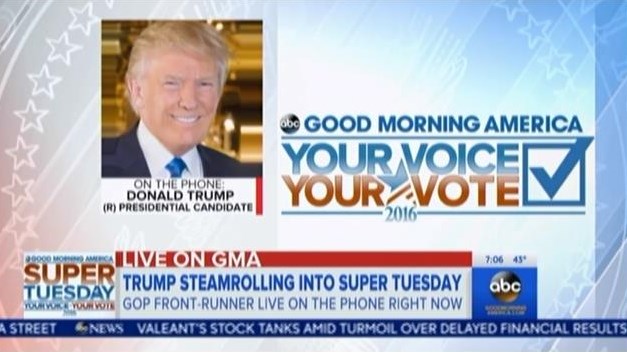 About nine hours earlier, after fumbling the matter on Sunday with Jake Tapper on CNN, Trump again disavowed support from Duke on Good Morning America.

Trump insisted “I disavowed him on Friday. I disavowed right after that because I thought if there was any question and you take a look at Twitter, almost immediately after on Twitter and Facebook, they were disavowed again. I disavowed him every time I speak to somebody virtually and they just keep it going. They keep it going and they said, ‘oh, we never looked at your Twitter account. We never looked at Facebook. ‘I said take a look at Facebook.' It was totally disavowed.”

Good Morning America host George Stephanopoulos demanded: “Are you prepared right now to make a clear and unequivocal statement renouncing the support of all white supremacists?” Trump replied, “of course, I am.”

Ross ignored emails and tweets about her column. I also asked, since she was demanding Trump disavow Duke, if she wished to disavow the white Washington Post vice president, who, according to a sworn affidavit he does not dispute, made racist jokes to black subordinates.

But reached on the phone Tuesday, she insisted that that pointing out a materially false statement was merely her caller’s “perspective” and proceeded to hang up.

Ross linked to a Glenn Kessler "Fact Checker" timeline on Trump and Duke, and Gahr was at least able to pressure Kessler to update his timeline with the March 1 ABC interview.